IVANPAH DRY LAKE — Workers at a state-of-the-art solar plant in the Mojave Desert have a name for birds that fly through the plant’s concentrated sun rays — “streamers,” for the smoke plume that comes from birds that ignite in midair.

Federal wildlife investigators who visited the BrightSource Energy plant last year and watched as birds burned and fell, reporting an average of one “streamer” every two minutes, are urging California officials to halt the operator’s application to build a still-bigger version.

The deaths are “alarming. It’s hard to say whether that’s the location or the technology,” said Garry George, renewable-energy director for the California chapter of the Audubon Society. “There needs to be some caution.” 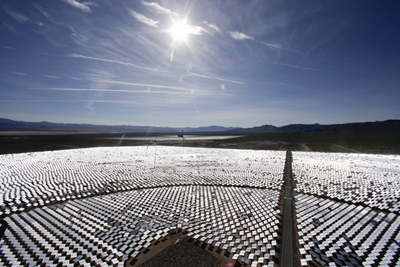 FILE – This Feb. 11, 2014 file photo shows some of the 300,000 computer-controlled mirrors, at the Ivanpah Solar ElectirIc Generating System in Primm, Nev. New estimates for the Ivanpah solar plant, an innovative year-old $2.2 billion solar project with Google as a major investor, say thousands of birds are dying yearly, roasted by the concentrated sun rays from the more than 300,000 mirrors. (AP Photo/Chris Carlson, File) (Chris Carlson)

The bird kills mark the latest instance in which the quest for clean energy sometimes has inadvertent environmental harm. Solar farms have been criticized for their impacts on desert tortoises, and wind farms have killed birds, including numerous raptors.

“We take this issue very seriously,” said Jeff Holland, a spokesman for NRG Solar of Carlsbad, the second of the three companies behind the plant. The third, Google, deferred comment to its partners.

The $2.2 billion plant, which launched in February, is at Ivanpah Dry Lake near the California-Nevada border. The operator says it’s the world’s biggest plant to employ so-called power towers.

More than 300,000 mirrors, each the size of a garage door, reflect solar rays onto three boiler towers each looming up to 40 stories high. The water inside is heated to produce steam, which turns turbines that generate enough electricity for 140,000 homes.

Sun rays sent up by the field of mirrors are bright enough to dazzle pilots flying in and out of Las Vegas and Los Angeles.

Federal wildlife officials said Ivanpah might act as a “mega-trap” for wildlife, with the bright light of the plant attracting insects, which in turn attract insect-eating birds that fly to their death in the intensely focused light rays.

Federal and state biologists call the number of deaths significant, based on sightings of birds getting singed and falling, and on retrieval of carcasses with feathers charred too severely for flight.

Ivanpah officials dispute the source of the so-called streamers, saying at least some of the puffs of smoke mark insects and bits of airborne trash being ignited by the solar rays.

Wildlife officials who witnessed the phenomena say many of the clouds of smoke were too big to come from anything but a bird, and they add that they saw “birds entering the solar flux and igniting, consequently become a streamer.”

U.S. Fish and Wildlife officials say they want a death toll for a full year of operation.

Given the apparent scale of bird deaths at Ivanpah, authorities should thoroughly track bird kills there for a year, including during annual migratory seasons, before granting any more permits for that kind of solar technology, said George, of the Audubon Society.

The toll on birds has been surprising, said Robert Weisenmiller, chairman of the California Energy Commission. “We didn’t see a lot of impact” on birds at the first, smaller power towers in the U.S. and Europe, Weisenmiller said.

The commission is now considering the application from Oakland-based BrightSource to build a mirror field and a 75-story power tower that would reach above the sand dunes and creek washes between Joshua Tree National Park and the California-Arizona border.

The proposed plant is on a flight path for birds between the Colorado River and California’s largest lake, the Salton Sea — an area, experts say, is richer in avian life than the Ivanpah plant, with protected golden eagles and peregrine falcons and more than 100 other species of birds recorded there.

U.S. Fish and Wildlife Service officials warned California this month that the power-tower style of solar technology holds “the highest lethality potential” of the many solar projects burgeoning in the deserts of California.

The commission’s staff estimates the proposed new tower would be almost four times as dangerous to birds as the Ivanpah plant. The agency is expected to decide this autumn on the proposal.

While biologists say there is no known feasible way to curb the number of birds killed, the companies behind the projects say they are hoping to find one — studying whether lights, sounds or some other technology would scare them away, said Joseph Desmond, senior vice president at BrightSource Energy.

The company is proposing the money for programs such as those to spay and neuter domestic cats, which a government study found kill over 1.4 billion birds a year. Opponents say that would do nothing to help the desert birds at the proposed site.

Power-tower proponents are fighting to keep the deaths from forcing a pause in the building of new plants when they see the technology on the verge of becoming more affordable and accessible, said Thomas Conroy, a renewable-energy expert.

When it comes to powering the country’s grids, “diversity of technology … is critical,” Conroy said. “Nobody should be arguing let’s be all coal, all solar,” all wind, or all nuclear. “And every one of those technologies has a long list of pros and cons.”