Opinion Why airport manager was fired

“Hell Bent For Election” describes many politicians as election day looms, but city planners could likewise be described as Hell Bent for Tax Revenues as they rush to approve growth projects and developers as Hell Bent for Profits as they push for zoning changes to build their developments as densely as allowed. That arm-in-arm relationship is considered a win-win for city planners and for developers in cahoots, but each with his own self-interest in mind. 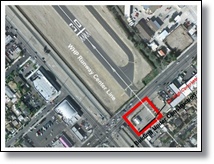 There is a new building being built replacing and existing one in the Runway Protection Zone (RPZ) for Runways 12-30 at the south end of the Airport just across the Street from the Approach end of Runway 30. The Photo of the area with the the existing building marked with a red square. The Building is being built in the City of Los Angeles and the the Airport is in Los Angeles County Property. CALPILOTS was told by people that attended the LA County Airport Commission meeting last month that they knew nothing about it and at this month’s Commission Meeting they had little more information. Read More