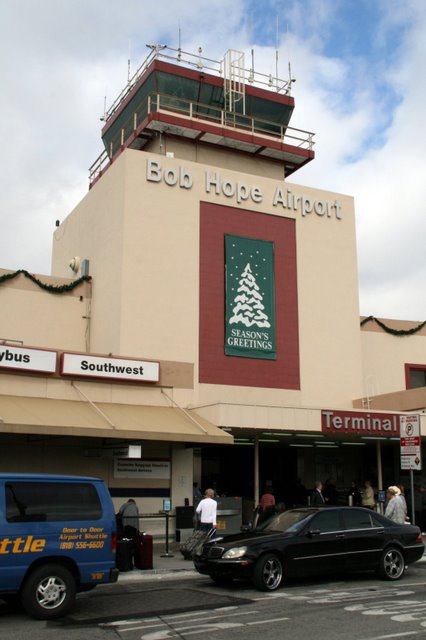 Comedian Bob Hope might not find humor in a promotional campaign proposed for the regional airport named after him.

Nationwide demand for air travel has been on the rise, but you wouldn’t know it by visiting Bob Hope Airport. Passenger traffic was flat for the first ten months of 2014, after two years of declining numbers, according to airport statistics.

One possible reason for the lackluster flier traffic, according to airport officials, is that many out-of-town travelers don’t know that Bob Hope Airport is located in Burbank, less than 15 miles from downtown Los Angeles.

Bob Hope Airport officials want to build a new terminal, and they’re seeking the participation of Burbank residents in the planning process – because ultimately the public will get the final say on its approval. 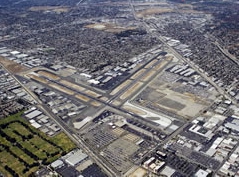 Burbank AirportFor those living near Bob Hope and Van Nuys airports, jet noise is a way of life. But it’s the noise at night from 10 p.m. to 7 a.m. that is prompting lawmakers to propose a mandatory curfew. “When you’re standing in your home or you’re standing outside or you’re trying to carry on a conversation or you’re trying to get some sleep, and you hear just how loud those flights are, and how much it makes your house shake, you’ll get a much better appreciation for what we’re talking about,” said Rep. Adam Schiff (D-Burbank).

Bob Hope Airport noise program to be reduced in sizeFootprint of airport-area home soundproofing will be “much smaller.

Residents living near Bob Hope Airport who have been waiting to takeadvantage of a federally funded residential soundproofing program shouldn’twait any longer. Read More

Bob Hope Airport is taking steps to prevent another power outage like theone last November that knocked out operations on its longest runway.

The Burbank-Glendale-Pasadena Airport A touthority last week voted to buy an emergency lighting system while officials complete a multimillion dollar plan to replace the dated wiring system that caused the outage.

“That outage, frankly, was not to the standard that we offer to the traveling public…. It creates havoc for those customers that couldn’t fly out of here at night,” said Dan Feger, the airport’s executive director.

The clock is ticking for residents living around Bob Hope Airport to tap a federally funded program to soundproof their houses before a shrinking noise-impact zone renders them ineligible, officials warned last week.

With fewer flights coming in and out of the airfield, and quieter aircraft taking to the skies, the noise-impact zone is expected to shrink significantly at the north and south ends of the runway, meaning homeowners who currently qualify for grant-funded soundproofing may soon find themselves outside the boundaries for the program.Dan Feger, the airport’s executive director, said homeowners who qualify should act quickly.

Bob Hope Airport in Burbank reopens as Hollywood film location – The airport had prohibited film shoots there since the Sept. 11, 2001, terrorist attacks put the air transportation system on high alert.