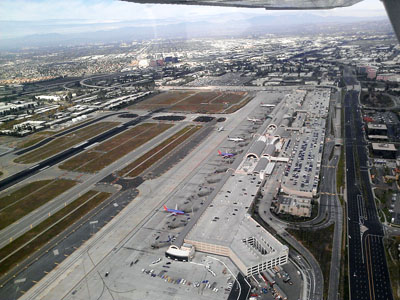 • On average, adds 10 daily departures of the noisiest planes in 2021.

John Wayne Airport’s flights and parking are expensive, and if it wasn’t hampered by decades-old structures, it could make the county’s economy move and work faster.

Orange County Register reporter Mary-Ann Milbourn told KNX 1070′s Chris Sedens and Diane Thompson workers at John Wayne will re-number the airport’ s two runways and update about two dozen directional signs to adjust for a periodic shift in magnetic north, the point at the top of the Earth that determines compass headings.

The number of passengers and flights at John Wayne Airport would gradually increase starting in seven years under a noise agreement proposed Thursday by the city of Newport Beach and local airport-noise groups. The early morning and late night curfew on operations would remain in effect until 2035.

Thursday’s announcement marked the beginning of a process to modify and extend the existing airport-noise agreement that is due to expire in 2015.

Newport Beach Mayor Keith Curry said the proposal struck a balance between the needs of the communities surrounding the airport and federal law, which restricts the local limits that can be placed on airports. Read More

Keeping the peace May 27, 2010 John Wayne Airport (SNA) in Orange County, California, is not your typical airport. At least it’s not the typical airport I come in contact with. Bracketed on both ends of two parallel runway by highways, and surrounded by densely packed commercial and residential neighbors, noise is the enemy of…