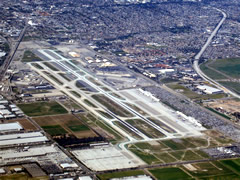 Anything that can help revive Ontario International Airport, I’m for it. No surprise, right? So when Los Angeles Councilman Bill Rosendahl suggested linking ONT to downtown LA by Metrolink to increase the number of flights, I was interested.

Rosendahl told me he envisions jumbo jets carrying international passengers making ONT the gateway to Southern California. It would relieve congestion at LAX, pleasing his constituents who live near LAX.

Rosendahl said he has long favored spreading air traffic across Southern California rather than concentrating it at LAX. Read More

ONTARIO – The $50 million payment offer from Ontario to gain control of LA/Ontario International Airport is part of a $250 million package the city offered Los Angeles to transfer title and operations of the facility.