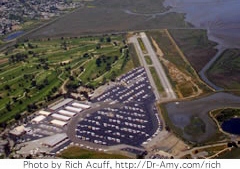 A deal to transfer Palo Alto Airport from Santa Clara County to the city has all but been cleared for take off.

As midnight approached Monday, the Palo Alto City Council unanimously approved a complex set of documents that would place the city in control of the airport, known as PAO. The State Lands Commission and the Federal Aviation Administration still need to weigh in on the deal.

“This is an outcome that we’ve had strong interest in for some time,” said Councilwoman Gail Price.

The county has operated the airport on land leased from the city since 1967. In 2006, the county announced it wasn’t interested in continuing the arrangement past the lease’s expiration in 2017.

AIRPORT DAY IS SEPTEMBER 29, AND WE NEED YOUR HELP! – Planning is well underway for AD13. The County will still be operating the airport but will not have the tenant appreciation dinner that kicked off the event in the past. Its level of support during the event has yet to be determined. As the city continues to work toward the takeover, AD13 is an ideal way to communicate to residents its value and importance.

Once again Airport Day attracted a good crowd and people learned a lot about their airport.  As always, the tower tours were a hit as were the EAA Young Eagles flights. The formation flight was impressive and it really showed the interesting things that ordinary GA aircraft can do. We estimate that between 3000 and 4000 attended.  Palo Alto Mayor Yiaway Yeh who gave a brief welcoming statement, was very impressed with the crowd and commented on the range of ages and diversity among attendees.

The city and county first met to discuss a hand-off on March 29, and the county Board of Supervisors is slated to hear an update on the deal’s progress Tuesday.

Palo Alto City Council to consider Wiedeman Report on the Airport, Monday, December 6 at it’s public meeting, starting at 7:00 PM. The item is actually a report from the Finance Committee which met last month. The agenda can be found on their web site.

Blaming general aviation for a pilot flying a private plane into an IRS building in Texas misses the point, according to columnist Jeff Schweitzer. Stack could have used another weapon to attack the IRS, and security measures cannot prevent all attacks. “While the misuse of an airplane will always remain a possibility, the extraordinary benefits…

In an effort to soothe nerves and reduce risk, the Palo Alto Airport Association is asking its pilots to change their departure routes so they fly over San Francisco Bay, rather than East Palo Alto. Read article »

Editor’s Note: The Palo Alto Airport Association, a Chapter of the California Pilots Association, has done an admirable job in assisting the airport when it comes to safety, noise and fiscal management. Read More

It’s been six weeks since a small plane crashed into an East Palo Alto neighborhood on a foggy Wednesday morning, killing three people on board. But plenty of reminders of the devastating crash still linger.

Honorable Mayor and Council Members: The California Pilots Association assists cities in preserving their public airports. The Palo Alto Airport is the region’s on ramp and off ramp to the nation’s aerial highways. As an important part of Palo Alto’s transportation infrastructor it plays an increasingly important role for business users. With Highway 101 becoming…