December 10, 2015 — Aviators filed a class action lawsuit Monday against the City alleging that landing fees at Santa Monica Airport – which were doubled in 2013 – were illegally adopted by the City Council.

The Federal Aviation Administration ruled Friday that Santa Monica Airport must stay open at least until 2023 — a decision that could frustrate the city’s efforts to reduce flight operations and then shut down the historic facility in the near future.

Actor Harrison Ford, other Santa Monica Airport tenants and national aviation groups filed a federal complaint Wednesday, challenging the long-held position of the city that the embattled airport can be shut down in July 2015.

Santa Monica leaders have insisted that the terms officials of federal airport improvement grants the city has received over the years allow them to close the general aviation hub next year because all conditions requiring operation will have expired.

But in a complaint filed with the Federal Aviation Administration, the tenants say that in August 2003, $240,600 was added to a $1.6-million grant, pushing back the closure date to at least August 2023. Grant terms usually expire after 20 years. 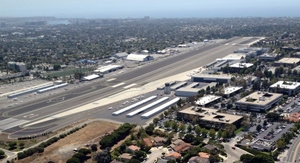 The city of Santa Monica, CA has been told in no uncertain terms by the FAA that they cannot close the airport and open up its 227 acres for redevelopment until at least 2023, and likely not ever, according to a communication sent by the agency to city government.

The agency says that the city failed to bring the suit in a timely fashion. “This lawsuit, which involves a recorded real estate instrument signed by the plaintiff over 65 years ago, should be dismissed. To begin, that recordation, and subsequent conduct over half a century, belies any notion that the case was timely brought under the Quiet Title Act,” the FAA wrote in its letter to the city. “That statute allows suits against the United States to resolve disputes about title to real property in which the United States claims any interest (with exceptions not relevant here) only if the plaintiff sues within twelve years of learning of the federal government’s interest. In 1948, plaintiff City of Santa Monica (City) signed a recorded instrument that documented the United States’ interest in the City’s airport (SMO or the Airport Property). Plaintiff’s knowledge in the 1940’s, and in the decades since, of the transaction giving rise to its claim here squarely triggered the QTA’s statute of limitations.

The Santa Monica Airport has long been embattled. City officials and nearby residents have made no secret of the fact that they are weary of it, especially as larger and larger private jets take off from and land on its single runway. Neighbors, some living no more than 300 feet from the runway, worry over safety, noise, and air pollution. The city has been in and out of court for decades, dueling with the Federal Aviation Administration — which oversees the city’s compliance with federal rules on aircraft and airport operations — for the right to close the airport or curtail its activities.

Now, the City Council has bypassed the courts and gone to its voters. Measure LC, which asserts that it is up to the City Council to decide how to manage the airport and whether to close all or part of it, passed decisively on Tuesday.
lRelated Your 405 exit is closed, but will Metro or Caltrans tell you?

A city sponsored ballot initiative — Measure LC — has passed in Santa Monica, Calif., leaving the future of Santa Monica Municipal Airport (SMO) in the hands of the City Council. The measure passed with 59% of voters saying “yes” with 90% of precincts reporting Tuesday. At the same time, voters rejected a separate measure…

In a step that could move Santa Monica Airport closer to closure, voters agreed to allow the City Council to make decisions regarding the fate of the airfield and rejected an effort by aviation groups to require a public vote on any effort to shutter the facility or restrict aviation activity.

Although city officials are still in a power struggle with the federal government over the future of the 227-acre airport, passage of Measure LC on Tuesday’s ballot gave the City Council a vote of confidence from residents.

(CalPilot’s Editor’s Note: Ever wonder where your membership fees go – this is an excellent example)   Two of GA’s top advocacy groups, the Aircraft Owners and Pilots Association (AOPA) and the National Business Aviation Association (NBAA) have contributed more than $540,000 to support a ballot measure in Santa Monica, Calif.,, that would halt efforts…

The Flying Scholarship for Girls offers one southern California high school student 30 hours of instruction and flight time at Santa Monica Airport. “We’re looking for the type of person who can give back to society and be a good role model,” said Kambiz Taleghani, who helped found the scholarship program because his daughter wanted…