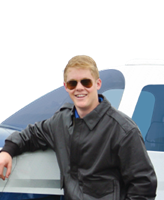 Fresno, CA. – At 20 years old, Jack Wiegand is preparing for the flight of his life to break the Guinness World Records™ title, something he has been working toward since his first flight at the age of 13. In May 2013, this record-breaking journey will take him from his home in Fresno, California, to exotic destinations he has dreamed of since childhood. Rome, Egypt, Bangkok and Tokyo are only a few of the locations he will travel to on his flight around the world.

Jack’s journey to make history began on his 13th birthday when he piloted his first introductory glider. On his 14th birthday, he became the youngest pilot in the Central California Soaring Club to solo a glider, and when Jack was 16, he soloed his first single-engine power plane. Now 20 years old, Jack plans to break the Guinness World Records™ title in May 2013 by becoming the youngest person to fly solo around the world.