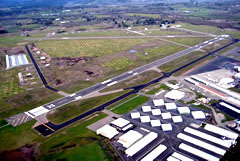 Public meeting planned on airport projects – The upcoming $53.8 million runway extension and safety project at Charles M. Schulz-Sonoma County Airport will be the topic of a public meeting Monday at the Windsor Town Hall.

The meeting starts at 6:30 p.m. in the Town Council Chambers.

Sonoma County officials have agreed to pay $815,000 for a family’s property next to the Charles M. Schulz airport for a runway extension project, settling the contentious case on the eve of trial.

The amount is roughly twice the total of what the county previously offered to pay for the land, along with the relocation expenses for the 73-year-old matriarch who lives there.

County set to award $23 million contract for airport expansion  – A Berkeley-based firm that led the Highway 101 widening work from Santa Rosa to Windsor is set to be awarded a $22.7 million contract to extend runways and make other upgrades at the Sonoma County airport.

O.C. Jones and Sons was the overall low bidder among six companies competing for the long-planned work at Charles M. Schulz-Sonoma County Airport. The Board of Supervisors is set to approve a contract with the firm Tuesday

More than 16,800 passengers last month flew with Horizon Air, and half of those flyers were visitors to the region, according to a monthly report by the county of Sonoma, which operates the airport. Horizon is the airport’s sole commercial carrier and a subsidiary of Alaska Air Group (NYSE: ALK).