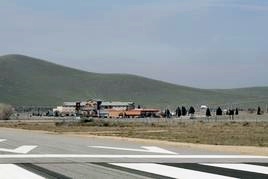 Caltrans addresses motel project compatability – Some local pilots are concerned that certain types of development in the Capital Hills area will eventually mean constraints on activity at Tehachapi Airport and long-term threats to the viability of the 75-year-old airport.

And a national organization — the Aircraft Owners and Pilots Association — has put the airport on its watch list of 10 airports nationwide that it is most concerned about. 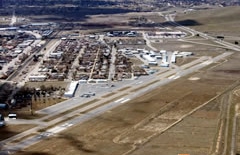 Guest Commentary: Airport compatibility and seat belts – Most all auto accidents (95 percent) are caused by driver error. Nevertheless and regardless of who is at fault, the State of California requires that you always wear your seat belt. If you choose not to wear your seat belt, you get stopped by the police, you should expect to pay a $200 fine. Wearing your seat belt is the law because statistics show that you really don’t know when an accident may happen and who may be at fault. Because of those unknowns, State intervention was needed to protect life and limb. Seat belts do save lives.

Like so many other municipalities, the Tehachapi City Council continues to straddle the fine line between doing the right thing and seeking taxes, in this case in the form of yet another hotel which will be built in an inappropriate airport safety zone.

Tehachapi – Like so many other municipalities, the Tehachapi City Council continues to straddle the fine line between doing the right thing and seeking taxes, in this case in the form of yet another hotel which will be built in an inappropriate airport safety zone. Mayor Phil Smith was quoted as saying – “We rely…

Tehachapi Airport Tehachapi City Council Denies Hotel Appeal – The Tehachapi City Council held a public hearing denying local airport hanger owner Kenneth Hetge his appeal to halt the construction of a new hotel in Capital Hills. The council made its decision at its Feb. 19 meeting despite hearing from nearly a dozen pilots who supported Hetge’s appeal, citing various incidents of aircraft crashes in other locations and other airport landing and take off related issues.

“I’ve been a pilot all my life,” said George Sandy, “I commend Mr. Hetge for doing his homework. He’s a staunch supporter of aviation.” 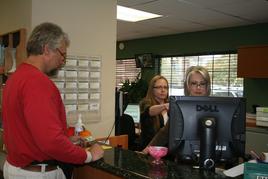 Airport hangar owner Ken Hetge files an appeal. Photo by Ed GordonAn action by the Tehachapi Planning Commission to approve the architectural design and site plan for a planned 69-room, three-story Motel 6 on a 1.06 acre site in Capital Hills has been appealed to the Tehachapi City Council.

Ken Hetge, a hangar owner at the airport, objected to the motel over concerns that the flight path of the airport passes over the site. Last week he paid the $1561 city filing fee on behalf of hangar owners. The appeal will come before City Council at a future meeting.

However, it seems that even at the time Planning Commissioners approved the project, the property owner Terry Delamater — and city officials — knew that Delamater no longer intended to build a Motel 6 on the site.

A proposed 7,106-acre wind energy project on the north-facing mountains of Tehachapi Valley, south of the city, would extend wind turbines from the east to beyond Tehachapi Mountain Park, according to the county planning document that has set the permit process in motion.