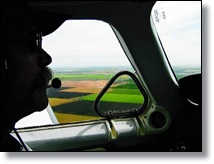 Rick Tutt flies with land fill seen out the window

‘This is the man cave,” said pilot Rick Tutt as we ducked inside a dim hangar. Tutt smacked a button, and the 50-foot hangar door rolled up. The sun poured in on a Piper Malibu airplane. Unlike the posh destinations to which Tutt flies his clients, we were going to fly over the dump.

Forward Landfill is imprudently located along the approach to Stockton Metropolitan Airport’s main runway. The dump’s owner, Allied Waste Services, wants to increase its size by 184 acres, about 25 percent.

That will attract more birds. Birds and planes don’t mix. The most famous example is 2009’s U.S. Airways Flight 1549. Geese struck it on takeoff and fritzed its engines. In a hair-raising save, the captain ditched into the Hudson River.

Tutt contends birds are already a hazard at Stockton’s airport. He recalled a March 31 close call. He was taking off from the main runway, called 2-9er.

“I went to take off from 2-9er right, and as I’m lifting off, a flock of 50 seagulls lifted off from the left runway,” he recounted. “One went over the top. A couple of ’em went underneath me. I think the ones that went underneath me got a haircut.”

Tutt believes the landfill brought the birds to the vicinity.

“We see them circling the landfill,” he said. “They’re going to the dump site looking for trash to eat. Anywhere from just above it to several hundred feet.”

Tutt rolled the plane out. The morning was clear. We squeezed into the cabin. Taxiing to the runway, Tutt lifted off. The plane climbed to 3,300 feet.

“I want to show you how an expanded dump site, which is a bird attractant, could severely impact our approach to the airport,” said Tutt.

He circled around to the southeast to approach landing at the airport the way most planes do. Two-9er is the main runway because, at 9,600 feet, it is the longest.

The runway came around, five miles ahead, pointing straight at us. We descended. When the plane was at 700 feet altitude and only one mile out, the sprawling landfill passed beneath us to the north.

Federal Aviation Administration safety guidelines say to minimize bird hazards, landfills should be 10,000 feet from airports. This one is less than 5,000 feet away.

“No birds today,” Tutt said, perhaps annoyed the birds were not cooperating. “Generally we see birds. They’re mostly seagulls. But we see hawks and crows and – there’s one right there!” he cried.

A black bird flashed past.

I didn’t have time to identify the kind. The plane was darting at 110 knots, about 126 mph, plus whatever speed the bird was traveling in the opposite direction.

The acrylic windscreen is much stronger than glass; at high altitude, however, the cabin is pressurized. “It could blow out on you,” Tutt said.

At low altitude, when the cabin is depressurized, “It could cave in on us and injure us,” Tutt said. “It would be shards of plastic. We could get cut.”

“Our concern is we come in at a prescribed approach, at an exact angle, coming out of the clouds and we have these birds,” said Tutt. “There’d be no escape for us.”

Calls to Forward Inc. were not returned.

In its Draft Environmental Impact Report, the company proposed to ease bird hazards by limiting the size of surface ponds as much as possible. It also proposed using noise-makers and “other measures as necessary.”

However, in a May 18 memo, General Manager Kevin Basso of Allied Waste asked county planners to pause the environmental review process so his people could revise the proposal to reflect people’s concerns.

“We need to very carefully scrutinize what the expansion of that facility’s impact will be on the airport,” Ornellas said.

Ornellas said he heard one of the “other measures” under consideration is using peregrine falcons to chase away the birds.

“Now, where it chases ’em off to, I don’t know,” Ornellas said. “That’s another question in itself.”

To read the article and view the associated pictures click here.

Editor’s Note: Rick Tutt is a member and past President of the Stockton Airport Pilots Association – a CALPILOTS Chapter