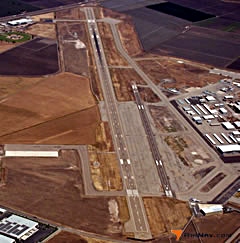 STOCKTON – San Joaquin County officials selected a new airport director Tuesday in a choice reflecting an oft-spoken view from county officials that Stockton Metropolitan Airport is not just a place for planes to land and take off – it is an engine of economic development.

The Board of Supervisors unanimously selected Harry Mavrogenes to fill the post. Mavrogenes has been chief deputy county administrator since November 2012, where he has led an effort to create an economic strategy for the county, including setting up an office in Silicon Valley to attract tech companies to the county.

Sully’s take on landfill expansion: For the birds

STOCKTON – A pilot who knows a thing or two about bird strikes is condemning the proposed expansion of a large landfill near Stockton Metropolitan Airport, saying it would be “stupid” to increase the risk of a collision.

Chesley “Sully” Sullenberger was sitting in the captain’s chair on Jan. 15, 2009, when his U.S. Airways jet plowed through a flock of migrating geese, lost both engines and landed on the Hudson River in New York.

All 155 passengers and crew survived in what was christened the “Miracle on the Hudson.”

Sullenberger did a lot of things right in the 208 seconds between collision and splashdown. But he admits he was lucky too – skies were clear and the strike happened during the daytime, making a river landing much easier.

“We can’t rely on miracles,” he said in an interview Monday. “Having a landfill near an airport is just an incredibly bad idea. You’re creating a risk where one did not exist before.”

The city is bringing in an outside attorney to see if it can settle a dispute between a development company and airport officials over a proposed 31-home development in Taft.

A Playa del Rey resident whom Mayor Antonio Villaraigosa nominated to the Airport Commission last week has resigned as president of a community group that sued to challenge the city’s $11-billion modernization plan for Los Angeles International Airport.

Despite efforts to stop it, the “stealth amendment” passed Congress Friday, granting the City of Rialto special dispensation to sell its airport. That amendment had been slipped into the conference negotiations over the massive highway funding bill.

Moving the southernmost runway at Los Angeles International Airport 55 feet for safety reasons will expose nearby residents to increased cancer risk and noise over an eight-month period during construction, according to an environmental impact report to be released today.

No title There’s an under-the-radar attempt in Congress to close the Rialto, California, airport. But it hasn’t escaped AOPA’s attention. The bill was slipped in as a “stealth amendment” to the federal highway funding bill, now being negotiated in a House-Senate conference committee. The provision reportedly allows the airport to be sold to developers for…

User Fees- FAA's Blakey Out Stumping Them at Oshkosh

The Administrator also began preparing the audience for coming changes in how FAA will get its funding, with broad hints that user fees may indeed be on the horizon.

Do Your Homework Before You Fly

Several bills have been tabled in recent weeks calling for fines (ranging into six figures and certificate suspensions as long as seven years) for anyone busting the various restricted areas around D.C.

CARLSBAD —- The Federal Aviation Administration has ruled San Diego County did not overstep its authority when it gave a new development company the exclusive right to massively remodel part of Carlsbad’s McClellan-Palomar Airport.