FRESNO, Calif. – When Tim Cone was eight-years-old he saw a neighborhood where people had airplanes in their garages instead of cars.

“I thought that’s the coolest thing in the world,” says Cone.

For the last seven years, Cone has been living out his dream in that very same place in a residential skypark.

Nestled among the rolling farmlands in the Central Valley of California lies the world’s first aviation community called Sierra Sky Park. It was established in 1946 for aviators returning home from World War II so they could have a place close by to fly their planes.

“The dream was to build a community where these people would find a home to live with their airplanes,” says Cone. 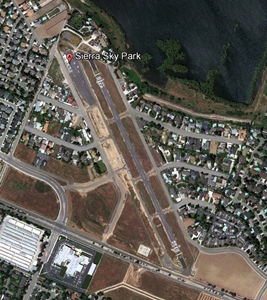 There are over 100 lots at the skypark, and almost the entire neighborhood has airplanes sitting in their garages that double as hangars.

“I like to fly airplanes . I walk out the door and I’m in the air,” says resident Phil Moradian.

Today there are over 600 residential skyparks in the United States and most are modeled after the original.

“Everybody out at the Sky Park shares the love of aviation. It’s a real binder to the community. A lot of neighborhoods don’t have that common purpose, the common hobby. It brings us together,” says Cone.

Cone is a professional pilot and most of the time he decides to skip out on morning traffic and fly to work.

“Seventy minutes in the car or twelve minutes in an airplane I opt for the airplane,” he says.

“It’s just a neat place, if you love aviation you love Skypark. We have something in common and we love airplanes,” says resident Jim Coehlo.

Some skyparks are home to big name celebrities like John Travolta and his luxury Boeing 707 that he keeps at home in Florida.

Most of the planes at Sierra Sky Park are prop planes that were built from scratch by their owner and cost anywhere from $20,000-$250,000. Residents say you don’t have to be extremely wealthy to belong to the community,

“It’s about the same if you belong to a country club playing golf,” says Jim Coehlo.

Sierra Sky Park operates as a privately-owned public use airport, where all the funding comes from resident’s donations. The Sky Park does not accept federal, state, or local government money.

“It’s never been a nickel of taxpayers money at the Sky Park and the actual labor to maintain it has been provided by the residents,” says Cone.

Sierra Sky Park looks like most neighborhoods, but with a few noticeable exceptions. The streets are 100 feet wide that allow both cars and planes to use them, and the street signs are just about three feet off the ground so the plane’s wings can glide right over them.

“Most skyparks that are new these days are split use where it’s planes are on one side and the cars on the other,” says Cone.

Cone is grateful for a home where he finally gets to live with his plane.

“It’s a little jewel and a wonderful airport that has been here since 1946,” he says.