Santa Monica’s Airport Commission urges city to give notice on ending leases, and to bar a key part of airport land from aviation use in 2015. 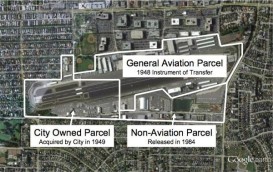 One recommendation asks the city to serve notice that in 2015 the city will terminate existing leases and discontinue leasing space to aviation and industrial tenants “engaged in activities incompatible with neighboring land uses including the sale of aviation fuel and other hazardous materials.”

That’s the year the city says its agreement with the Federal Aviation Administration to operate the airport in its current configuration will expire. The FAA, however, contends the true expiration date is 2023, and that another agreement compels the city to operate the airport “in perpetuity.” (CalPilots Editor’s Note: Clearly the Santa Monica City Council believes if they say something long enough it will become true. Santa Monica took money from the FAA and they are obligated to abide by that agreement. No different than highways or waterways)

Another recommendation, similar to one the commission sent the council earlier this year, calls for the removal from aviation use “as soon as practicable after July 1, 2015” one of three parcels comprising the current airport. It’s the 18.6-acre “1949 Quitclaim Parcel” at the airport’s west end that contains about 40 percent of the runway.

“These two recommendations are really critical to positioning the city to have more power to direct the future of the airport than any measures I’ve seen up to now,” commissioner Stephen Mark said of the lease termination and parcel removal recommendations.

Commissioner David Goddard insists the actions are similar to past actions taken by the city and upheld by courts, such as the nighttime curfew and noise limits.

The recommendations passed unanimously despite some disagreement among the four commissioners on the practical effect of the capital expenditure and trip-generation items.

In a separate action, the commission asked the City Council to formally endorse a community group’s request for the Southern California Air Quality Management District to review the airport’s air quality, with an eye to imposing controls.

The initial request to SCAQMD came from Concerned Residents Against Airport Pollution in a March 2012 letter. The group’s attorney, Mitchell Tsai, says the request needs Santa Monica’s support to be effective.

“Santa Monica Airport is too small for SCAQMD to study without [the city] saying it wants action, Tsai told the commission.

The council’s endorsement could put the city in the position of asking that it be ordered to reduce SMO’s emissions, possibly putting it at odds with both the FAA and the federal Environmental Protection Agency.

But Tsai argues that SCAQMD, with approval from the California Air Resources Board, can regulate aircraft emissions under the Federal Clean Air Act.

Click here for more coverage of the Santa Monica Airport.