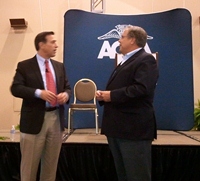 CalPilots asked Congressman Issa a pointed question regarding NOAA’s recent airspace grab along areas of the California, and Washington state coast, lowering the floor in two over water areas, which is not only confusing, but in our opinion, not required as NOAA never provided specific proof that it was justified.

The California Pilots Association stated that “NOAA never bothered to answer our letter regarding justification to change this airspace”, and asked “why any aviator deemed in violation, even by untrained ground observers, was considered guilty until proven innocent?” We also asked “when did the innocent until proven guilty change in the United States?”

Our letter, written to FAA Acting Administrator Michael P. Huerta asking for clarification about how instrument approaches were supposed to be flown, was responded to by a low level subordinate, and basically said – “the NOAA has the power to do this” – or in other words, we are not interested in responding to your concern about airspace confusion or potential unjust violations.

Congressman Issa assured us that NOAA and the FAA would respond, and asked that the California Pilots Association provide him the letters to the FAA and NOAA, along with the FAA’s disappointing reply, and stated that “he would write a letter to get answers”.

AOPA CEO Craig Fuller also asked for copies of the letters, and of Congressman Issa’s letter.

The California Pilots Association is in the process of doing that now. We will keep you advised as to this important issue facing all California and other U.S. pilots.

Congressman Darrel Issa’s district includes much of the southern California area. For more information about Congressman Issa, go to his web site. http://issa.house.gov/