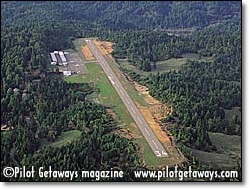 “Willits has an airport?” – That’s the question new airport manager Dan Ramsey sometimes gets on introductions. “Yes, for nearly 49 years,” he responds. “The reason many Willits people don’t know about the airport is that it’s located four miles out of town at the northeast corner of Brooktrails,” he explains. “It serves the entire Little Lake Valley and beyond. A Willits pilot can be whale-watching, landing in Ukiah or Covelo, or even at Lampson Field in Lakeport, within about 20 minutes.”

Aviation annually adds $155 million to California’s economy. The state has nearly 35,000 registered aircraft and more than 62,000 licensed pilots and 246 airports, yet only 30 offer commercial passenger service. The other 87 percent serve “general aviation,” single- and twin-engine aircraft, typically owned and flown by people for recreation.

Willits Municipal Airport, also known as Ells Field, is one of those community-based airports. It has about 20 aircraft on the field, most housed in city-owned rental hangars, Ramsey said. The City of Willits also sells aviation fuel with an automated system for local and transient aircraft.

Built in the early 1960s by volunteers, Ells Field is owned by the City of Willits and managed by Ramsey with the continued help of volunteers. The Federal Aviation Administrationand CalTrans Division of Aeronautics certify and help fund the airport through grants as part of a nationwide network of community airports.

During the summer of 2008, the Willits Airport was a centrally-located base for CalFire helicopters and other emergency aircraft fighting more than 100 area fires. Willits airport is a training venue for the area’s Citizen’s Emergency Response Team, serves California Highway Patrol and other law enforcement aircraft, and can serve as a gathering place for local residents in case of a major fire or other disaster that blocks the Sherwood Road egress from Brooktrails, Ramsey notes.

Nearly every year, the Ells Field celebrates Airport Day, featuring aircraft and helicopter rides, historic aircraft to view, and other activities and attractions. This year’s event has been moved tentatively from August to September. The exact date and details for the expanded Airport Day will be announced soon Ramsey says.
For nearly two decades, Willits Airport also has been the home of Experimental Aircraft Association Chapter 1027. Some members have built and fly their own aircraft; others fly factory-built planes of all types and vintages.

The EAA meets at the airport once a month for a weekend lunch to share their passion for flying, including a display of historic aircraft.
Another little-known use of the Willits Airport is dog walking. Nearby pet owners frequently walk their dogs on the 75-acre airport property, carefully obeying the posted leash law for the safety of pets and pilots.

“On a weekend morning,” says Ramsey, “cars often park in the parking lot to watch aircraft activity. It’s certainly not as busy as Ukiah and other airports, but it is always fun to see a variety of aircraft fly in from the Bay Area, the Sacramento Valley or Eureka/Arcata, fuel up and take off for new adventures.”
Local business owners also rely on Willits Airport for professional travel, and the airport parking lot “is an excellent vantage point to watch meteor showers and eclipses,” Ramsey says.

For more information on the Willits Municipal Airport, visit www.WillitsAirport.com.