Boeing Back at San Bernardino Airport 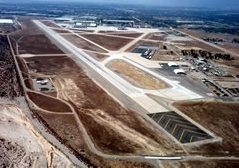 The return of the world’s leading aerospace company is a welcome and much-needed boost for San Bernardino’s beleaguered international airport. Following up on a commercial shoot and aircraft testing at the airport earlier this spring, Boeing returned in late May to begin testing its 747 model. The company expects the work to wrap up in August.

It’s not the commercial passenger service San Bernardino International Airport officials have long sought, but landing the Boeing contract is a positive sign of recovery and should muzzle critics who continue to paint the redevelopment of the former Norton Air Force Base as a waste of taxpayer dollars.

Consider these facts from SBIA officials: Boeing is spending up to $100,000 a week on jet fuel; some 90 employees are working in San Bernardino; and surrounding businesses are seeing a bump in sales due to the activity at the airport.

Meanwhile, SBIA reports that much of the airport’s available space has been leased and its operations rented out, underscoring its viability as an economic engine in the San Bernardino Valley.

This is all good news — very good — and it allows SBIA to take another step out from under the shadow cast by disgraced former airport developer Scot Spencer, whose apparent mismanagement of the airport and its operations came to light following a grand jury investigation and subsequent FBI raid.

Spencer has pleaded not guilty to five felony counts, including two counts of conspiracy, for allegedly filing a fraudulent $1.75 million claim against the airport. Before he was slapped with the charges and his airport management companies went bankrupt, however, Spencer allegedly mismanaged basic operations at SBIA, including the fuel farm that is currently making it possible for Boeing to conduct its work.

The fuel farm and other airport operations are now under interim executive director A.J. Wilson, who credits SBIA’s management turnaround with Boeing’s return.

Professional, credible management is exactly what SBIA needs if it is to continue making progress on its long-term plan to bring commercial passengers to San Bernardino.

Wilson, who has proven himself a steady hand while course-correcting airport operations, will be a tough act to follow when he decides it’s time to leave SBIA. Thankfully, he’s committed to putting in place an airport vision and development plan that will steer future airport officials.

A market analysis commissioned by Wilson has given SBIA officials some clarity about the type of commercial service that best suits San Bernardino — flights catering to niche, seasonal and leisure travelers.

Armed with the study and working on plans for ramped-up marketing of the airport, SBIA officials planned to meet with airline officials in Atlanta earlier this month to persuade them to taxi into one of San Bernardino’s waiting passenger terminals. No word yet on whether those talks yielded an agreement.

In the meantime, welcome Boeing. Come back and see San Bernardino again.