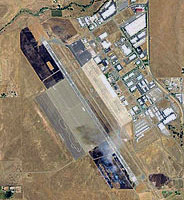 SkyWest Airlines will no longer serve the Chico area citing poor financial performance as its reason for leaving. SkyWest flies under contract with
United Airlines as United Express out of Chico.

Orme said that the city is still trying to hire an airport manager and he thinks the experience that comes with that position is needed now more than
ever.