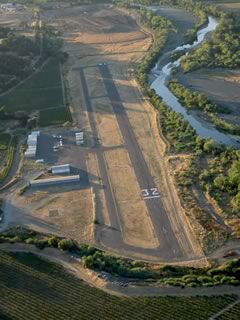 What does it take to close an airport?

That’s a question on the minds of many people in Cloverdale these days, prompted by a developer’s demand that the city close it in order for him to build an adjacent upscale resort hotel and million-dollar homes.

Jes Slavik said his proposed $200 million Alexander Valley Resort and equestrian center will generate jobs along with hotel-bed, sales and property taxes — a tantalizing prospect for the small city, which has struggled with economic development since most of its lumber mills closed and the main highway was rerouted out of downtown two decades ago.

Slavik has made it clear that the municipal airport has to go. He claims the planes would spook the horses at the planned equestrian center and disturb guests and residents of the high-end resort and homes that would be built nearby, even though skeptics say horses have been known to become accustomed to airplane noise.

Potential hotel operators “all believe it would be difficult to operate a resort on the site with an airport in place,” Slavik said in an interview this week.

The demand to close the half-century-old airfield and the suggestion of “repurposing,” or transforming it into a sports complex with soccer, baseball fields and other amenities, has bolstered the hopes of airport critics already upset over noise from planes connected to a local skydiving operation.

The step also has sparked enthusiasm among residents eager to see more recreational opportunities in Cloverdale that might include team sports, as well as potential walking trails, a dog and skate park.

But the idea of closing the airport is also provoking a predictable backlash from pilots who say it’s more than just a launching pad for hobby fliers and has served as a base for medical evacuations, firefighting, business flights and a fog-free alternative when the airports in Santa Rosa and Ukiah are socked in.

“It’s not just a piece of pavement. It’s part of the community,” said Doug Dugger, a pilot and owner of Quality Sports Planes, which has operated at the airfield for 10 years, assembling, flying and selling kit planes. “A lot of people say, ‘Let’s close the airport.’ They don’t realize how valuable an airport is to the city.”

That includes serving as an alternative to get in and out of the northern part of Sonoma County in the event of a major emergency, such as an earthquake that closes down Highway 101.

“Once you lose an airport, you can never put one back in. It would be difficult,” Dugger said.

Jacqueline Kennedy, a vocal critic of the airport, counters that the facility “only benefits a handful of Cloverdale people at this time.”

Kennedy, a Dutcher Creek Road resident, is part of a contingent, including Slavik’s wife, that has complained bitterly about airplane noise from a skydiving operation headquartered at the 58-acre airport. She said the facility has been in the red for years, costing the city money that it can ill afford to spend.

“It’s a drain on the general fund. It’s not self-sustaining at all,” she said.

City Council members don’t like that the airport does not pay for itself and draws between $30,000 to $50,000 annually from the city’s strapped general fund. But none of them are advocating closing it.

“We are not anti-airport, just anti-subsidizing it,” Councilman Joe Palla said.

He said the city is using general fund money that could go to programs that support the entire community and instead is spending it on the airport, “which doesn’t benefit most people.”

“I’m getting tired of funding a losing proposition,” Councilman Gus Wolter said. “It needs to generate income or break even.”

Plans for the Alexander Valley Resort — a revised version of an earlier approved project that included a golf course that has since been dropped — resurfaced this summer. Around the same time, the city renewed the lease for NorCal Skydiving, a move that raised questions about the airport’s deficit and how much the city should be charging businesses to operate there.

The City Council directed the city attorney to look into what it would take to close down the airport, a report that is expected to be produced soon with the help of an aviation legal expert.

Councilman Wolter said the council basically asked the attorney to “give us the pros and cons, the expense involved with shutting down the airport.”

The inquiry is set to focus on what would happen to the land, and the city’s responsibilities to pay back the Federal Aviation Administration for improvement grants, such as $1.5 million that was obtained a few years ago to repair and resurface the runways.

“All those questions need to be explored,” said Councilwoman Carol Russell, “and the general question is, ‘Is it the right thing to do, to close the airport?’ ”

FAA officials shed little light on how Cloverdale officials might go about shutting down the airport if they wanted to, or how approval might be obtained.

In accepting federal improvement grants, Cloverdale has committed to “keep the airport open and make it available for public use,” FAA spokesman Ian Gregor stated Friday in an email, adding that the facility is identified as important to national air transportation and is an officially recognized part of the nation’s airport network.

“There is no process for an airport operator to pay back federal grants to close an obligated airport, nor is there a standard formula or process for closing an airport,” Gregor stated.

“I think most people don’t realize how expensive and time-consuming and difficult it is to close an airport,” said Councilwoman Mary Ann Brigham, who noted she is neither opposed nor in favor of a closure.

“I imagine it would take a few years and cost a few million to close it down,” she said. “You have to have very good reasons for closing it, because it is an asset to the feds. You have to show it’s in the public interest and the interest of aviation. It’s not easy to close an airport.”

“The cost of dismantling the airport would be outrageous,” said recently hired Cloverdale airport manager Michael Morrissey, who said his predecessor calculated it would involve removing thousands of tons of concrete and asphalt, as well as cleaning up hazardous materials.

He said there are more than 20 tenants at the airport — including aircraft owners and two businesses, one of them the skydiving operation — and the city could face potential liability for ending their leases prematurely.

Ed Dalbec, a member of the Cloverdale Pilots Association and flight instructor at the airport since 1978, said if the city tried to shut down the airport, it could expect a legal challenge from the largest pilot organization in the country, the Aircraft Owners Pilot Association.

Dalbec, 71, said an FAA official told him it would take more than 25 years to go though the process, adding, “You will never see it closed down in your lifetime. It’s just not going to happen.”

But airport opponents are undaunted. They point out that a number of private and general aviation airports have shut down in recent years.

Jeff Kennedy, a Cloverdale airport foe, said the grounds and collection of buildings are dilapidated and not up to code or minimum standards for access by disabled persons.

If the City Council does not move to divest the city’s interest in the airport, he said, the “nuclear option” remains — placing a measure on the ballot to have Cloverdale voters shut down the airport.

He said the measure would be along the lines of one that passed last year in Santa Monica that effectively closed down the airport there so the property could be used for a park and other purposes.

A ballot measure in Cloverdale would be worded so there is no doubt that the airfield would be used for a sports park and river walk and as an educational tool for students to study river ecology and riparian areas, he stated in an email.

City officials say they not only need more information about the ramifications of trying to close the airport, but also want to see more specifics on the funding for the sports and recreation park that might take its place.

“Where does the money come from, and what does it cost?” Councilwoman Russell asked. She said those questions need to be answered before people get too excited about repurposing the airport.

Slavik, a Cloverdale resident whose corporation has an option to buy the 254 acres next to the airport to develop Alexander Valley Resort, said the company will contribute the money necessary to close the airport, prepare the land for new park uses and construct the first phase of the sports park.

Slavik said he has “high net worth individuals” to invest on the equity side of his project and there may be more traditional debt financing involved as well.

He said he has a December deadline to make a decision on whether to go forward with Alexander Valley Resort.

Although the resort project was approved by the City Council in 2009 with a 150-room hotel, restaurant, conference and commercial center, Slavik’s Laulima Development LLC still needs to get approval for some of the changes he is proposing, such as larger lots for the 80 luxury homes he wants to build, and the equestrian center and public open space. The city already has agreed to allow him to drop the 18-hole golf course that was part of the project approval obtained previously by property owner Tyris Corp.

Council members have expressed doubts about how well an equestrian center would fit in Cloverdale, as well as whether the resort hotel would draw enough guests to generate $1 million per year in hotel bed taxes, as Slavik claims.

Mayor Bob Cox said he does not want the airport to close, seeing risk in the proposed trade-off.

“What if we close down the airport so we can have this resort with an equestrian center and that doesn’t succeed?” Cox said. “It leaves us not only with a closed airport we can’t do anything with, but an empty hotel, or a hotel with no equestrian center.”

You can reach Staff Writer Clark Mason at 521-5214 or clark.mason@pressdemocrat.com. On Twitter @clarkmas.