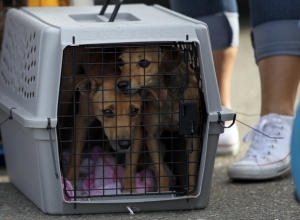 For scores of dogs running out of time in Bay Area shelters, Cindy Smith is something of an angel.

Smith is cofounder of Wings of Rescue, a nonprofit, all-volunteer group of pilots who use their personal planes to fly rescue missions about twice a week. Since creating Wings of Rescue five years ago, almost 15,000 dogs have found new homes in the Pacific Northwest. This year, the group is aiming for 7,000 rescues.

“I’ve always been an animal lover,” Smith says, “but when I bought a plane, it opened up new possibilities.”

Smith grew up in Castro Valley, surrounded by horses, dogs and cats. She went on to become a mortgage broker — a career she’s had for more than 30 years — but she added a new dimension to her life when she took a ride in a small plane about 12 years ago.

Something about soaring through the clouds sparked a fire in her.

It took her about a year to earn her pilot’s license, and after doing all the things citizen pilots do — flying to brunch, taking friends up for a spin, zipping off on weekend adventures — Smith felt the need to find a purpose for her wings.

She began volunteering with a group in Bakersfield, flying rescued dogs to other locations, but that wasn’t enough. Smith wanted to do more, and she knew she could.

Smith works with area rescue groups, selecting dogs from shelters where time is starting to run out. The majority of the dogs are pit bulls and Chihuahuas, two breeds that are disproportionately represented in shelters, and two breeds that have trouble finding homes.

Smith then coordinates with Humane Society groups primarily in Oregon, Washington and Idaho, assuring that the dogs have been secured spots with welcoming homes.

The first rule, Smith says, is that those organizations have to “help their local dogs first” before taking the California dogs. But those states, unlike California, don’t have a glut of dogs and often have people waiting for a pet.

Patricia Weisenberger is the founder of Pleasanton-based Lucky Dog Rescue, one of the first groups to work with Wings of Rescue. To her and the dogs she helps rescue, Smith and her organization “mean everything.”

“The shelters are not so overcrowded because of her,” Weisenberger says. “She has had a tremendous impact in the area.”

Recently, Weisenberger was on vacation when she got a call from a shelter that she doesn’t routinely deal with. It had a pit bull puppy that was scheduled for euthanasia unless someone took quick action.

Lucky Dog relies on volunteers to foster animals until they are adopted, but all of her foster homes were full and all of the other rescue organizations she called had all they could handle.

Weisenberger called Smith, who rescued the dog and two others, and found foster homes for them.

“When you have a problem, call Cindy,” Weisenberger says. “She is always so nice. Always.”

Fremont Animal Services Officer Stephanie Saunders doesn’t want to think of all the dogs that might not have made it out of the shelters if it hadn’t been for Wings of Rescue.

When the shelters are full or near capacity, a call goes out to Smith, Saunders says, who normally takes four to eight dogs at a time.

“We have to take all animals,” Saunders says, “and the shelter gets pretty full. Dogs may spend several months here and it can be very stressful for them. If not for Cindy, many of them would go kennel crazy. She makes a huge difference.”

Smith credits the rescue groups and her cadre of 25 Bay Area pilots, who provide their planes and shoulder the cost.

Wings of Rescue recently purchased its own plane, a pressurized Piltus PC-12 that can carry 80 to 100 dogs, but it still relies on local pilots to help with transport.

Smith also is pleased to see the public shelters working so hard with rescue groups to find home for animals. She says she sometimes has animal service officers calling her on their days off, alerting her to animals that need help.

“It’s amazing to have these abilities to save these rescued pets,” Smith says, “knowing they’ll have a new home. And it’s like they say — you lose your mind but you find your soul.”

Claim to fame: Cofounder of Wings of RescueHometown: Livermore

Quote: “When we work together, we can save so many more animals.”