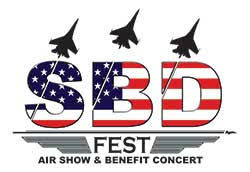 (San Bernardino, CA – September 15, 2015) SBD Fest will take place at SBD International Airport on Saturday, October 17, 2015; celebrating the return of air shows to the skies over San Bernardino. The event offers a unique opportunity for the Airport to connect with surrounding communities and provide a fun event for families in the region. The opening ceremony, scheduled for 10:45 am, will pay tribute to the Airport’s rich heritage as a former US Air Force Base.

Attendees will witness amazing aerial performances from high-flying acts such as the Patriots Jet Team; a six jet team performing death defying, side-by-side formations at incredible speeds. Skydivers, stunt aircraft, jet aircraft, helicopter demonstrations, and static displays of planes, including vintage and military aircraft from the past and present.

“It’s been nearly 25 years since the former base conducted annual air shows that created so many fond childhood memories throughout the community,” says Mark Gibbs, Director of Aviation at SBD International Airport. “Many of us that grew up in the area eagerly awaited the annual event so we could witness the awe-inspiring formation aerobatic feats performed by jet teams similar to the Patriots Jet Team.”

Mr. Gibbs adds that while Administration is excited about progress taking place at the Airport, it is significant to recognize the important role the former base served protecting our country and the impact it had on the fabric of the community.

The Airport has high hopes for the inaugural event as it marks the return of air shows over the skies of San Bernardino after an extended hiatus. Crowds are expected to exceed 10,000 attendees so it is advised to arrive early to select be best view of the flight line.

About SBD Fest: SBD Fest is a one day aviation celebration featuring aerial acts, static aircraft displays, a classic car show, beer gardens, vendors and live entertainment. Headlining the air show portion of the festival will be the Patriot Jets Team, an elite formation jet team of six aircraft performing tight formation flying and breath taking maneuvers. Entertainment throughout the day will feature live music including a headlining Country act presented by 95.1 K-FROG Stater Bros and Pepsi. A portion of the SBD Fest proceeds will benefit the Heroes’ Wings Foundation, a 501(c)(3) non-profit organization dedicated to providing flights for our veterans suffering from injuries such as PTSD and TBI. For more information, visit: www.sbdfest.com

About SBD International Airport – Located approximately 60 miles east of Los Angeles, the former Norton Air Force Base was converted to civilian use in 1992 and later became certified as a commercial airport by the FAA. The Airport offers a full range of services and facilities to aviation in the Southern California region, including the best-in-class FBO, Luxivair SBD, four maintenance repair & overhaul (MRO) businesses, air cargo services, and the Airport is positioning itself to provide domestic and international passenger service. www.sbdairport.com