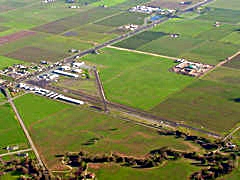 Lodi Airport and Cafe – a great place for kids and adults – If you’re looking for a place where kids can experience an airport the way it used to be in the 1940s and 1950s, check out Lodi Airport, located along Highway 99 in Acampo. According to owner Robert Kupka, the airport started in 1929 with one dirt runway which was paved in the 1940s, and in the 1960s a second runway was added. Mr. Kupka purchased the airport in 1978, and since that time has added hangars and outbuildings. The Airport Cafe, newly renovated in 2012, graces the frontage road. The airport and cafe are both open seven days a week.