Land Use Near Inland Airports A Crucial Safety Issue

When the Perris City Council allowed a 173,000-square-foot distribution center to be built inside the Air Force’s “accident potential zone” just south of the March Air Reserve Base runway, it defied a request by two Riverside County supervisors who feared developing the buffer zone more than the recommended 20 percent. 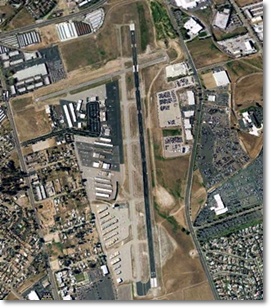 Pilots, Inland municipal airport managers and owners, and state aeronautics and federal aviation officials are constantly assessing what types of development could chip away at airport safety zones. The state makes recommendations, but cities and counties can overturn them, putting safety zones and development on a collision course. Seventy-five crashes have occurred in the past five years near these Inland airports, according to the National Transportation Safety Board, making the conflict a crucial issue. The only recorded accident south of March’s runway was in 1979 when a B-52 crashed near Markham Street. The development recently approved by Perris is closer to the runway, according to the city’s general land use plan.

At Flabob Airport, safety zones and development are visible to the north and south of the airport. Pilots, Inland municipal airport managers and owners,and state aeronautics and federal aviation officials constantly analyze what kinds of development could chip away at airport safety zones.

“Our main concern is safety, not just with airport users but those surrounding the airport — the public,” said Heidi Williams, senior director of airports for the Aircraft Owners and Pilots Association, which has some 415,000 members. “While there are processes to protect and enhance safety around airports, they don’t always have the teeth we need to implement that protection.” The state sets guidelines for property owners and local jurisdictions to determine appropriate land development near airports, said Terry Barrie, a senior planning official with Caltrans’ Division of Aeronautics. 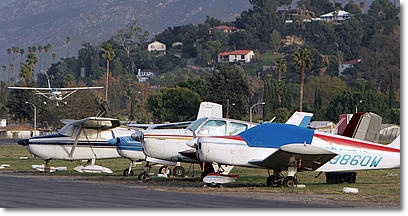 Those land-use compatibility plans are meant not only to ensure safety, but also to reduce vulnerability to incompatible development and preserve the long-term use of general aviation airports, Barrie said. Yet a two-thirds majority vote by a city council or board of supervisors can overrule the land-use plans, said Bob Cable, CEO of Cable Airport in Upland, a large family-owned public-use airport where more than 360 aircraft are based. “There are really no government agencies that strictly enforce it other than private entities filing lawsuits to stop construction,” Cable said. There has been plenty of development around Cable Airport, including three houses a pilot once crashed into near the runway approach.

“Thank God nobody was hurt,” Cable said. “But those houses were built in an area where Caltrans and the state of California said they shouldn’t have been built.”

Safety zones such as the one at March are meant to provide a “buffer,” keeping communities safe from aircraft accidents, said Ian Gregor, Federal Aviation Administration spokesman. Such zones are critical for aircraft safety too, said Temecula pilot Kevin McKenzie.

When the engine on McKenzie’s pre-World War II open-cockpit military trainer conked out in October near Rialto Municipal Airport, the veteran 51-year-old pilot knew the biplane lacked much in the way of gliding capabilities. “My engine loss occurred at virtually the only spot in space and time — horizontally or vertically — where A, there wasn’t enough runway to land straight ahead, or B, to turn around and land on the same runway going the other way,” he said. McKenzie had to crash land his 1941 Naval Aircraft Factory N3N-3. Rialto’s runway protection zone turned out to be a godsend. “I’m sort of walking proof why those (safety zones) get put into effect,” he said.

Nothing binding
Airport land use compatibility plans, whether designed by Caltrans’ Division of Aeronautics or county restrictions, said Bill Ingraham, San Bernardino International Airport’s aviation director. “One thing to remember in all of this is the guidelines only address planning,” Ingraham said. “If there’s an existing land use — they’re entitled — these guidelines don’t apply.” That leaves some airports with almost no runway buffer zones, Gregor said. “The local government may have allowed the development to encroach on the airport before these kinds of regulations were put in place,” Gregor said. In one such case, homes on Pembroke Drive in Riverside were built a quarter-mile away from Riverside Municipal Airport in 1957, well before guidelines were in place, Riverside city public information officer Austin Carter said in an e-mail. In February, a plane plunged into the neighborhood after takeoff. Three people onboard died, but no one on the ground was injured because the plane missed the homes. 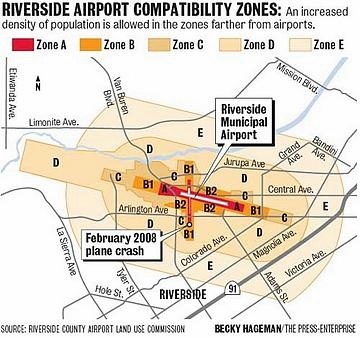 Zones determine density
“Airport influence zones” can extend several miles around major airports or only a couple of miles around smaller airports such as Banning and Corona, said John Guerin, principal planner for the Riverside Airport Land Use Commission.

The commission’s land-use compatibility plan sets guidelines, with safety, noise, airspace protection, aircraft type and runway lengths among factors that are considered. In November, when Perris council members approved the distribution center, they argued the land-use guidelines were not based on scientific data that would justify denying the development. Next month, the city, county and others will reconvene to update policies for land use around the base. Cable said even the best planning won’t prevent all mishaps. “The inevitability is that if you’re there long enough, something is going to happen sometime, somewhere,” Cable said. “It’s just where is that arrow going to drop after you shoot it in the sky.”

The size of zones varies for each airport