Last weekend, members of the Agua Dulce Airport Association had the opportunity to participate in the Challenge Air event at Whiteman Airport in Pacoima California.

Challenge Air was founded in 1993 by Rick Amber, a Viet Nam fighter pilot, who lost the use of his legs in 1971 while attempting to land on an aircraft carrier, returning from his 109th combat mission.

Amber later became a math and science teacher. In that capacity he was asked to design a curriculum for an aviation class. While doing this; he realized how much he missed flying. He purchased a private airplane in 1993 and combining his love of aviation with his love of children; he began to fly the first (now 3,500) special needs children. He 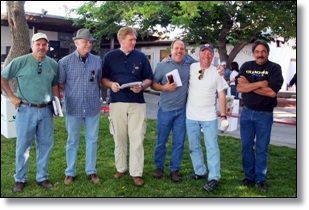 advocated for this event until his death in 1997.

Today events are held in 12 states across the nation. It was Rick Amber’s belief every disabled person should see the world from a view that unfettered them from the world of their disabilities. It was his ambition for every disabled child to be able to see this other world.

Pilots flying in last weekend’s event came from as far away as Texas, and as nearby as Agua Dulce. Aircraft utilized for the event represented a full spectrum of small general aviation airplanes from the humble Cessna 172, to the beautiful Cirrus. 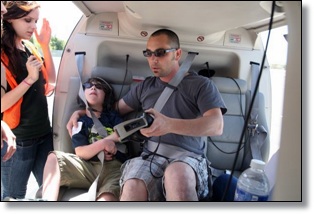 Children confined to wheel chairs were flown by helicopter. A total of 37 volunteer pilots flew 124 special needs kids, 125 adults and 65 siblings/friends for a total 314 passengers.

As families arrived they were given numbers and assigned to their own flight team. A short ground school was arranged for all prospective passengers. The well organized event provided numerous activities and displays to occupy the young “pilots” while they awaited their flights. 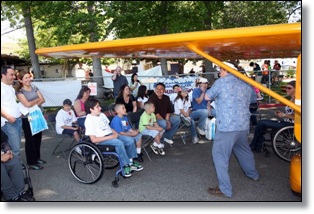 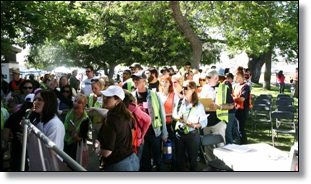 Later in the evening pilots were invited to dine at the Sand Canyon estate of Ed and Mandy Donovan. Firestone Grill graciously donated a much appreciated dinner. The day was summed up by Lorna Leslie who commented, “It was awe inspiring to see the look on the faces of these children as they came back from their rides and went through the lines of people cheering their accomplishment.

Obvious to even a casual observer was the awe, pride, and the palatable sense of accomplishment on every child’s face!” Another way it could be put is to quote the author of ‘The Little Prince’, Antoine de Saint-Exupery, “We owe the discovery of the earth’s real face to the plane. For centuries our roads had deceived us”.

Today 124 special needs children got to see this world.

Editor’s Note: The Agua Dulce Airport Association is a Chapter of the California Pilots Association.