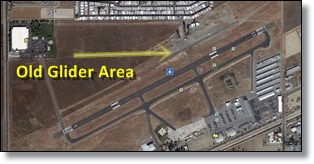 The long awaited Director’s Determination arrived. The FAA sustained our complaint and found the County to be in violation of the grant assurances.

At CALPILOTS request the FSDO conducted a safety audit and found that simultaneous glider operations may be done safely and recommended the same “safety enhancements” we proposed prior to filing the Part 16 action.

The following are highlights from the memorandum:
As part of its investigation of the Complainants’ allegations, the FAA initiated a safety study to determine whether glider operations could be safely conducted at the Airport. This study was conducted by the Riverside Flight Standards District Office (FSDO) and it included a review of the Airport’s layout and references the dedicated glider runway.

A memorandum outlining the FSDO’s findings is referenced as FAA Exhibit 1, Item 13.15 This memorandum states: “This office finds that the physical facility and geographic location of HMT to be consistent with safe simultaneous operations of glider and powered aircraft.

This office recommends the following safety enhancements for future operations:
1. All tow and glider aircraft make and monitor traffic calls on the CTAF [Common Traffic Advisory Frequency] that is currently listed in the A/FD [Airport Facilities Directory] as 123.0MHz.
2. All winch launches be provided a two-minute window clear of any other runway traffic, assuring the safe retrieval of the launch line without compromising the safe operation of aircraft on the adjacent runway.
3. Airport management ensures the A/FD, Los Angeles Sectional and VFR [Visual Flight Rules] Terminal Area Charts are updated and depict glider operations.
4. These, and other Special Operating Procedures deemed necessary by the Hemet-Ryan Airport Manager, be posted in a conspicuous place where pilots are likely to gather.” [FAA Exhibit 1, Item 13]…

In short, the Director finds that the Respondent inappropriately relied on its judgment, as opposed to the FAA’s, with regard to a safety-related aeronautical restriction. The FAA has preempted aviation safety. Airport sponsors are not permitted to unilaterally restrict aircraft operations for safety reasons without advance concurrence by the FAA’s Offices of Airports, Flight Standards, and Air Traffic. [FAA Order 5190.6B, ¶14.3]

Summary of Issue (1) The Respondent admits it closed runway 4-22 and generally prohibits gliders from departing on runway 5-23 because these actions were both permitted and justified. The Director does not find the Respondent’s explanations to be convincing or reasonable.

The Respondent is obligated by its grant assurances and its surplus property deed to operate the airport – not just specific pieces of infrastructure on it – on reasonable terms and without unjust discrimination.

The closure of runway 4-22 and limitations on runway 5-23 effectively closes HMT to glider operations. This restriction is not reasonable because the FAA’s safety evaluation found that glider operations could be conducted safely from runway 4-22. Moreover, the Respondent’s other reasons for closing runway 4-22, in addition to being flawed or unsupported by the evidence of record, are not sufficient to overcome the Director’s concerns regarding the denial of access. As a result, the Director finds the Respondent is in violation of Grant Assurance 22, Economic Nondiscrimination, and its obligations contained in the surplus property quitclaim deed.

Summary of Issue (2) The ALP depicts runway 4-22. It notes that the current length and width is 2,045 feet by 25 feet, but is planned to decrease to 1,485 feet by 25 feet. [FAA Exhibit 1, Item 18] The Respondent’s decision to close runway 4-22 is not consistent with its FAA-approved ALP. The Respondent has not taken the appropriate steps to ensure that its ALP is up to date. Therefore, the Director finds that the Respondent is currently in violation of Grant Assurance 29, Airport Layout Plan.

FINDINGS AND CONCLUSIONS
Upon consideration of the submissions and responses by the parties, and the entire record herein, and the applicable law and policy and for the reasons stated above, the Director, Airport Compliance and Field Operations, finds and concludes:
• The Respondent’s unilateral decision to close of runway 4-22 and prohibit glider departures from runway 5-23 constitutes an unreasonable denial of access for glider operations in violation of Grant Assurance 22, Economic Nondiscrimination and the Respondent’s obligations contained in the surplus property quitclaim deed.
• The Respondent’s unilateral closure of runway 4-22 is not depicted on the FAA-approved airport layout plan and constitutes a violation of Grant Assurance 29, Airport Layout Plan.
• The Respondent is not a displacing agency under 42 U.S.C. § 4601 et seq. and is not in violation of Grant Assurance 35, Relocation and Real Property Acquisition.

ORDER ACCORDINGLY, the Director finds that Riverside County is in violation of Federal law and the Federal grant obligations. The County has 30 days to submit a corrective action plan including the projected timeframe for completion that
(1) provides glider operators access to the airport;
(2) negotiates in good faith with those entities desiring to provide glider-related commercial aeronautical services;
(3) utilizes the expertise of FAA staff to develop appropriate operating procedures applicable to all airport users;
(4) adopts and enforces appropriate operating procedures applicable to all airport users;
(5) develops a process to improve communication between the County and aeronautical tenants at the Airport; and
(6) completes the draft airport Master Plan and any necessary ALP updates.

The County has 30 days to appeal and will prevail only if a court invalidates the FAA’s determination on the basis it was “arbitrary and capricious.” Not a likely event.

Editor’s Note: This is another example that shows and proves that the airport sponsor cannot do whatever it wants when it comes to transportation infrastructure, which is what airports are.