It is important to understand that just a few years ago the South Lake Tahoe City Council was ignoring its airport, and allowing it to fall into a state of disrepair. 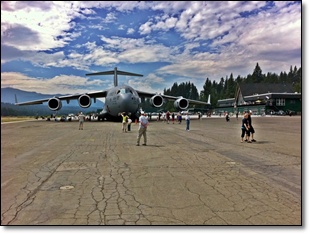 Then a fire swept through the west side of the Tahoe basin. Fire fighter aircraft were brought into TVL and used to control the spread and eventually distinguish the fire.

Since then, the city council better understands the value of its airport, and has invested in it.

TVL’s annual airshow takes a lot of work to be as successful as it is, and it is proof that the municipality and community now value its airport.

The local EAA Chapter was there too signing up kids for Young Eagles flights.

Mooney Ambassadors (Jolie Lucas and Mitch Latting) were also there. They had 24 Mooneys in attendance and had 5 in the opening of the air show. They had hundreds of kids making paper airplanes at their booth, and got lots of kids and adults in the Mooneys.