The Evolution of an Airport Event

Quick thinking and a little effort allowed the use a worldwide event to promote an airport – Santa Monica Airport.

In July 2011 I read an article about Wei Chen’s flight around the world with emphasis on the ground-breaking five stops in China. For a country that is just now gradually opening its vast and beautiful geography to private aviation, this was a landmark event.

Being a board member of Friends of Santa Monica Airport (FOSMO) it occurred to me that we might use this event to publicize the airport. As you know, SMO is under constant attack by those who don’t understand the value of aviation, and the remarkable asset that the city and the country has in this airport.

The idea was simple. Wei was coming to Los Angeles area (airport unspecified but probably LAX) so why not bring him to SMO?

We rapidly organized to welcome him. It would be a win-win, with Wei’s trip getting the publicity it deserved as well as some good PR for Santa Monica Airport. Further, Wei’s flight could be tied into the 1924 Douglas World Cruiser flight that originated at – you guessed it – SMO.

How can you insure success when there are only five days between light bulb and alighting on the runway? It’s really not that difficult, and anyone can do it.

There were probably a couple hundred emails, twenty phone calls, and at least one last minute heart-stopper before it all happened.

First – contact the celebrity – in this case, Wei Chen. Wei’s brother, John replied which started the process. I was then connected to Jason Zhang, who immediately recognized the confluence of objectives between Wei’s trip and Santa Monica Airport’s continued operations.

Wei Chen was in Harbin China, and by the time he had gone through Russia and landed at Anchorage, I was in touch with him by email and phone.

Second – mobilize the troops – in this case: FOSMO, CalPilots, AOPA, and don’t forget your fellow aviators and friends.

We also had the magnificent help of Montgomery Day Company (MDC), the professional PR firm that had lent its time and expertise to Wei.

MDC’s Tricia Montgomery and I became close email buddies. She had a first-hand recount of the flight through China in which she had accompanied Wei.

Third – mobilization of the press. Our able Board Member Ken Fuller began drafting a press release, which went through a number of iterations with all parties playing a part.

Fourth – remember our airports benefit local businesses. Those who have visited Santa Monica Airport know the Typhoon, a top-notch restaurant. I spoke to the owner, Brian Vidor, who spoke to the airport administration to advise them of and to prepare for the event.

The heart-stopper – there was a mishap on the runway two hours prior to Wei’s arrival. Apparently SoCal ATC had the airport listed as still closed at 3:15 even though it had long since opened.

About six to eight minutes prior to Wei’s SMO ETA, I received a frantic call that Wei had been diverted to Burbank. Sure enough, FlightAware showed a destination changed to BUR.

By that time we had 25-30 people including press and television (and a number of kids) waiting to greet Wei and crew at the Typhoon. After some additional communications we learned Wei had changed back to SMO, and when we stepped outside the Typhoon, Wei’s beautiful TBM 700 was just touching down.

Wei Chen taxied into the prime spot in full sight of everyone in the restaurant. The crowd was later allowed in a limited area on the tarmac around the aircraft for pictures.

As a result of these efforts, Santa Monica Airport became part of a well-publicized around the world flight. Like most airports, it needs all the help it can get.

Airport events – including the arrangements for some notable to come to your airport, can be accomplished by anyone at the almost 300 airports served by California Pilots Association in this great State.

I also want to acknowledge the webmasters at FOSMO and CalPilots, as well as Craig Fuller and Bill Dunn at AOPA.

Please don’t hesitate to contact me through this web site if you’d like to discuss this process. 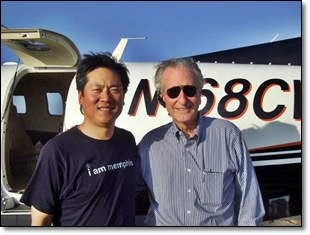