Passersby would never guess it today, but a commercial section of Temecula between what’s now Diaz Road and Business Park Drive used to be an airport.

“Mention of the Rancho California Airport brings two types of responses,” Murrieta historian Anne Miller wrote in a 2005 report for the TemeculaValley Historical Society. “Most people are surprised to learn that there ever was an airport in Temecula, while others have great stories and memories” of it.

The airport lay north of Rancho California Road and west of what today is Interstate 15.

“A current road, Rancho Way, crosses over what used to be the runway,” Miller said.

In the 1960s, the 87,500-acre Rancho California master-planned community was under construction in what would later become Temecula. The airport was created by the builders of Rancho California Plaza (today’s Tower Plaza). Developers commuted to the site by air and needed a landing strip. Miller found a Los Angeles Times photograph from Nov. 6, 1966, showing a helicopter
towing an old plow to break ground on the airport.

The airport served small aircraft. Temecula resident Bill Harker told Miller about his first flight into Rancho California Airport: “It was just a 1,200-foot gravel strip with one hangar, a small office and a few planes tied down.”

A 1967 aerial photo shows a single paved runway and no buildings. The airport got incremental improvements, though. In 1968, an airport directory listed it with a runway of some 3,000 feet in length. It gained lights for nighttime landings. By 1982, Airmech Industries and Rancho Aviation managed the airport, offering fuel, flight instruction, rental, charter and maintenance service, Miller said. In the mid-1970s it charged $2 for overnight tie-downs. Harker said Rancho Inn in the Plaza used to send its manager to the airport to pick up incoming passengers in a Volkswagen bus.

Though Temecula was developing rapidly, the airport never grew into a major hub, due in part to formidable winds that plagued the site.

“Frequent strong, gusty crosswinds were a serious hazard,” Miller said, and contributed to accidents, including fatal ones.

“It was quite a white-knuckle experience” due to wind, she said. “You had to dive down and come to a stop quickly. It was kind of scary.”

Miller cites a Times story of May 15, 1976, that reported that airport owner Kaiser-Aetna  closed the airport because its insurance company was alarmed about accidents. Riverside County took over and reopened it.

Locals told Miller of picnics, barbecues and “hangar parties.” One resident recalled the airport hosting an encampment for Civil Air Patrol for its cadets. But the Rancho California Airport closed for good in 1989, just after a new airport opened in nearby French Valley. Planes and hangars moved to the new airfield.

Harker remembered at least one pilot circling the business park, searching in vain for the airport.

“Someone eventually contacted (him),” Harker told Miller, “and directed him to French Valley Airport.” 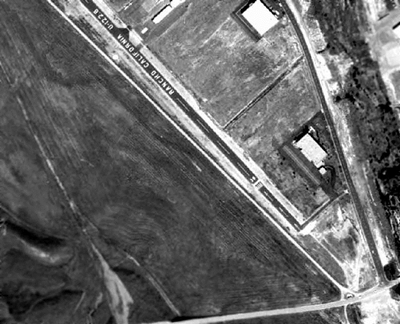 CalPilots Editor’s Note: If you want to check out the airports closed in your area click “Lost and Abandoned Airfields” under Resources in the left column of this page. This picture of Rancho California Airport came from that resource.