Airports may be some of the most brightly lit places on earth. And that makes them big consumers of electricity. 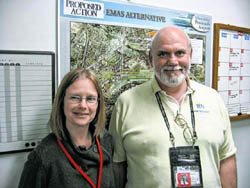 Given all the terminal, parking, runway and aircraft ramp areas that need lighting at the Monterey Regional Airport, any retrofit with more efficient lighting should, therefore, constitute a savings of both energy and money. So replacing the old lighting systems became an important element in the airport’s “sustainability” program, said Mark Bautista, the airport district’s deputy general manager of planning and development. “(Lighting) is one of the few things we do that includes all the different departments here at the airport,” Bautista said. “Retrofitting was one of the important elements in the overall program.” ( Chris Morello, left, and Mark Bautista, Monterey Regional Airport administrators. are shown)

After an energy audit of the terminal building, aircraft ramps, streets and parking areas, the auditors made recommendations on how to improve the lighting and save energy. Realizing that such a retrofit made sense economically and environmentally, the Airport Energy Lighting Program was launched in 2004 with a combination of airport district money and FAA Airport Improvement Program grants. The funds were used to replace the airfield lighting with energy-efficient opinions including LED lights on the taxiways and pilot-controlled lighting for both runways. After one year of use, measurements showed usage of all airfield lighting dropped from 193,600 kilowatt hours to 102,960 kilowatt hours. This 47 percent reduction in offered a graphic indication of the savings a program of this nature could create.

The next phase of the Airport Energy Lighting Program in spring 2009 centered on installing more energy-efficient lighting in the terminal. Once again, the savings were noticeable. After just six months, the total electrical usage for the terminal when compared to the same period the previous year fell from 694,720 kilowatt hours to 602,776 kilowatt hours, a 13 percent reduction. In the third phase came retrofitting of the street lights on airport property, beginning on Fred Kane Drive and wrapping around the north side of the airport. Low-maintenance induction lights were installed, which provided a high quality of light while being durable and energy-efficient.

In November 2010 a new, energy-efficient flight information display system was added in the terminal. Rather than running continually, software programs the screens to turn on and off as appropriate for customer traffic in each area. The final phase of the project, wrapped up in January, was the retrofitting of all the parking areas and the airfield ramp. More induction lights were installed. Each fixture comes with a lume-wave wireless controller and a sensor that enables the installation to operate as a system that can determine a person’s direction of travel. Thus, the controls can dim the lighting in a given area when no movement is detected, thereby saving energy. The finished project is expected to reduce the airport’s energy use by 420,000 kilowatt hours, for a savings of about $55,000, annually.

The sustainability effort didn’t just focus on lighting, although that’s a key component. A recycling program was established at the airport in 2008 followed by the purchase, in 2009, of an electric maintenance vehicle. The following year, motion sensors were placed in the terminal’s restrooms in the sinks and toilets. In August 2011, energy-efficient film was installed on the airfield side of the terminal windows and doors. The film eliminated 99.9 percent of ultraviolet light penetration, 88 percent of the glare and 77 percent of the solar energy while maintaining a clear view, airport officials say. In December a weather awning was installed on the front, street side of the terminal that offers passengers entering and leaving the building protection from the elements.

During the months to come, three networked plug-in electric vehicle charging stations will be installed in the airport’s parking areas. Chris Morello, the airport district’s grants administration project manager, noted the Association of Monterey Bay Area Government board recognized the airport this past August with an Energy Efficiency Leadership Award for the work that has been done thus far. By participating in Energy Watch and the Rightlights Energy Efficiency Program, the airport has assumed a leadership role in the area, Morello said.

The next step, Bautista said, is to do an update of the airport’s master plan. Paperwork has been filed for a grant to pay for the update. “This is typically done every 15 to 20 years, and it falls under the sustainability sector,” he explained. “There is now a pilot program in the U.S. for airport master plans based on sustainable methods. This is totally a new way of looking at master plans for the future.”