May 18–Marin energy officials announced a new agreement to buy electricity from a 972-kilowatt solar installation to be erected on rooftops at the San Rafael Airport. 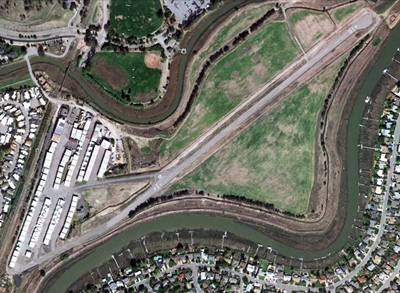 The Marin Energy Authority made the 20-year deal with the airport as part of its feed-in tariff program, which allows local property owners to sell electricity from small-scale installations directly to the authority, officials said at a launch event Thursday.

“It’s kind of an important benchmark in the story of (the authority),” said Dawn Weisz, the authority’s executive officer. “We have a local project now in Marin.

“It’s good for the community,” she added, noting that the project will create local jobs.

Once installed this summer, the solar project will be Marin’s largest and will supply enough electricity for about 280 homes a year, Weisz said.

The authority, which now consists of the county of Marin and all 11 of Marin’s municipalities, is the first successful attempt in California to launch a new, public model for providing electricity to residents. It serves as the retail electricity provider for its customers, who continue to also pay Pacific Gas and Electric Co. for transmission and distribution of their electricity.

The authority is trying to jump-start the use of renewable energy sources by stimulating demand and offers customers the opportunity to buy electricity that is supplied by 50 to 100 percent renewable sources.

Earlier this week, the

city of Richmond voted to join the Marin Energy Authority, Weisz said. However, the authority’s board must still approve that addition.

The authority serves about 14,000 customers and plans to add more than 80,000 more in coming months. It is looking at potential sites atop parking structures in Larkspur, San Rafael and Novato for a second Marin solar installation, Weisz said.

San Rafael Councilman Damon Connolly, chairman of the joint powers authority, called the solar project a “significant” step for the authority and Marin.

“It’s the first of its kind under the feed-in tariff program, and we’re hoping that it really sets an example for other projects to come,” Connolly said.

The project will cost San Rafael Airport about $3 million, with around half coming from airport funds and the remainder from a Bank of Marin loan, said Bob Herbst, the airport’s manager. Installation is expected to begin in June and wrap up in August.

The airport will likely get a 7 to 8 percent return on investment each year, Herbst said.

Last month the authority mailed opt-out notices to potential new customers throughout Marin, sparking confusion and anger among some residents who have found the opt-out process cumbersome. PG&E customers who wish to remain with the utility must take steps to opt out; otherwise, they automatically will become Marin Clean Energy customers sometime in July. Two more notices will be sent to those residents after the enrollment deadline, in late July and August, informing them that they can still opt out without paying a penalty. Residential customers who wait more than 60 days after the enrollment deadline to opt out will be subject to a one-time fee of about $5; commercial customers will be charged about $25.

The authority’s energy is now 50 percent renewable, up from about 27 percent last year, Weisz said.