TRACY (CBS13) – A small mistake at the Tracy Municipal Airport is now causing a big problem.

Business at Tracy Municipal isn’t flying high and business owners say they’re worried about keeping the business they do have, following a two inch snafu on it’s runway.

A small mistake at the Tracy Municipal Airport is now causing a big problem.

It started as a numbers game, but now the length of the airport’s runways has turned into a numbers crunch.

But now the length of the airports runways has turned into a numbers crunch.

“Right now the big story is, do we have minus four or plus four, said Ron Dement, airport employee.

Four thousand that is, the magic number the airport’s runways need to be for some jet planes to be able to land. The problem is that one runway is marked a few feet shy, while the other is just two inches short.

“Recently we did a repaving out here, or a slurry seal,” said Dement. “They claim the slurry wasn’t put out to the entire runway; it was just shy.”

Business owners and the Tracy Air Association say it’s no laughing matter. They say the FAA has issued a notification to pilots about the runways, and now the airport’s fuel business isn’t taking off because some planes won’t touch down on the runways.

“Now that it’s showing below 4000 feet, there’s insurance issues. They may not want to come in here no more, or they won’t because of the insurance issue,” said Dement.

According to Airnav.com, Tracy Airport jet fuel is priced the lowest in 40 miles. The owner says it’s a response to the significant drop in business.

The city has promised to fix the problem, and some businesses say it can’t happen soon enough.

Dement says there’s a concern it will be classified as a small airport and receive fewer federal funds. 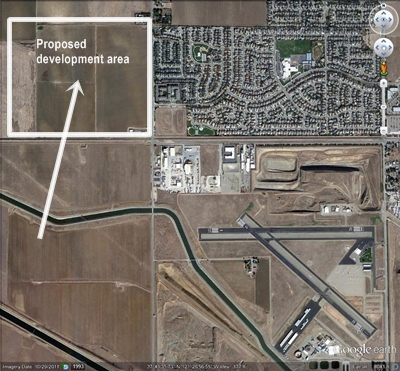 CalPilots Editor’s Note: This Reporter missed the nuance in that what the City of Tracy is really trying to do is to allow for a housing development to be built closer to the airport. They are trying to accomplish that by changing the rules to their advantage. A shorter runway means smaller airport operations protection area. As aviators, we also know that means long term headaches for the airport. Read some of the other articles about Tracy airport below to better understand what the City of Tracy has done regarding the airport in the past.