Mojave – A Desert Town on the Way Up to Space 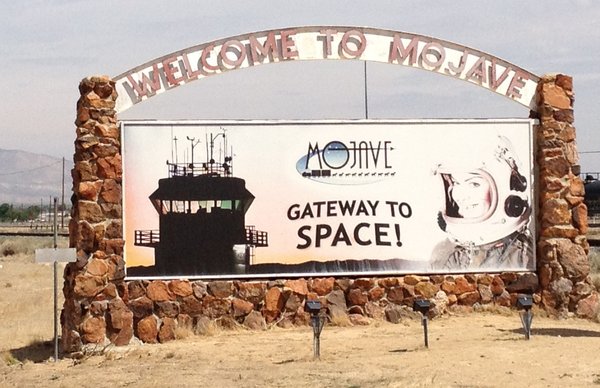 Mojave, Calif., is the home of the Mojave Air and Space Port. Beyond it lies the Mojave Air and Space Port, once a Marine auxiliary air station during World War II, now an incubator for the tinkerers and dreamers in the New Space movement. Adherents believe that the next phase of space exploration will be led by nimble, ambitious entrepreneurs — a new generation of people like Bill Hewlett and Dave Packard, who helped create the electronics industry in a garage — and that this is their moment to come together and make it happen.

“It’s very similar to the Silicon Valley effect,” said Stuart O. Witt, the chief executive of the space port for the past decade, explaining how half a dozen outer space start-ups came to cluster at Mojave, a small desert town about 90 miles north of Los Angeles.

This is where the first private, piloted spacecraft, SpaceShipOne, launched in 2004. Virgin Galactic is now conducting flight tests of a larger version, called SpaceShipTwo, that will take tourists on jaunts 62 miles up, giving them a brief bout of weightlessness. Small start-ups here are also developing new rocket fuels and trying to transform a discarded second stage of a rocket into a prototype moon lander.

This month, the headline event for this push of entrepreneurs will take place on the other side of the country, at Cape Canaveral, Fla., where the Space Exploration Technologies Corporation, or SpaceX, plans to launch cargo (but no people) to the International Space Station.

Until now, all spacecraft going to and from the station have been government-operated vehicles like NASA’s space shuttles and Russian capsules. SpaceX’s Dragon capsule, perched atop its Falcon 9 rocket, will be the first purely commercial supply ship — albeit one paid for by NASA — to make the trip. The launching, delayed several times, is now scheduled for May 19.

The mélange of small aerospace companies at Mojave shows that the ambitions of the New Space movement go far beyond serving as a delivery service for NASA.

Two of the companies are fronted by famous billionaires: Virgin Galactic is part of Richard Branson’s empire, while Stratolaunch is the brainchild of Paul Allen, a co-founder of Microsoft. Stratolaunch is building two cavernous structures, a factory to build an airplane with the widest wingspan and a hangar to store it in. The airplane will be an airborne launching pad for a rocket. 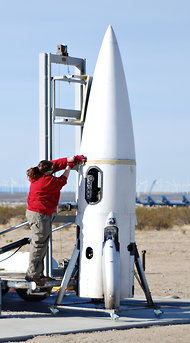 Several times a week, the Mojave-based Masten Space Systems flies its reusable rockets. Then there are the lesser-known start-ups with shallower pockets and grungier work spaces. Masten Space Systems is housed in a one-floor box dating to Mojave’s World War II days. The w 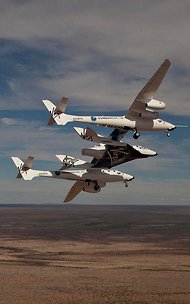 At the Mojave Air and Space Port, Virgin Galactic conducts tests of SpaceShipTwo. orkshop is essentially a large garage, with pieces of rockets sitting on the concrete floor.

Masten’s specialty is its software, which makes a rocket take off vertically, hover and then land softly on the launching pad.

David Masten, the founder, used to dabble in rockets while running a technology company in the Bay Area. After the company was sold to Cisco, he founded his rocket company and, three years ago, won $1 million in a NASA-sponsored competition to demonstrate precision flying similar to what would be needed for a future lunar lander.

The venture has attracted people like Nathan O’Konek. A lawyer by training, he was working in New York putting together finance deals and volunteering at the Intrepid Air and Space Museum to sate his fascination with space. On a visit to Mojave, he learned about Masten and chucked it all to move here, becoming the director of business operations.

With just 15 or so employees — the number changes with the flow of interns — Mr. O’Konek is often out at the launching pad helping load liquid oxygen into a rocket. Masten engineers fly their reusable rockets and conduct engine tests several times a week. “You’re out there all the time,” Mr. O’Konek said. “I like what we’re doing. It’s exciting, but I also like to see the other companies out there pushing the envelope.”

Even smaller is Firestar Technologies, which gets much of its money from federal research contracts. Its main product is an alternative fuel for the thrusters that spacecraft use to maneuver in space. The chemical currently used, hydrazine, is highly toxic, and Greg Mungas, Firestar’s chief executive, has a less toxic kind that could be tested soon on the space station.

Mr. Mungas started Firestar while at the University of Colorado, Boulder, but in 2009 he moved the company to Mojave, where it fit in more easily, adding to the cacophony of sonic booms, explosions and rocket launches that are heard daily. “There are very few experiments that you can’t basically design and run” in Mojave, he said. “It’s a very, very open environment for doing this kind of testing. It’s great.”

Mojave is also the home of Scaled Composites, started by Burt Rutan, an aerospace pioneer. It was he who designed the first plane to fly around the world without refueling: Voyager, which in 1986 took off from Mojave and landed here again nine days later.

The air and space port is in an area replete with aerospace history. Just to the south is Edwards Air Force Base, where many of the Air Force’s early rocket planes flew, including Chuck Yeager’s X-1, the first to break the sound barrier.

While Mr. Rutan’s company continued to thrive after the 1986 flight, the rest of Mojave languished. By the mid-1990s, the port was best known as a parking lot for mothballed jets that airlines could not afford to fly.

The modern history of Mojave as a space capital starts with a business failure: the Rotary Rocket Company. The founders of Rotary wanted to shake up the industry with a low-cost design that merged rocket propulsion with helicopter blades in a vehicle that could get all the way to orbit. A prototype of the vehicle, called the Roton, was built and got off the ground with three test hover 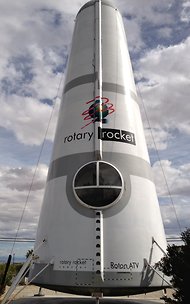 The Roton was developed in Mojave by the Rotary Rocket Company before it ran out of money. The vehicle now rests in a park. flights — but then the company ran out of money and went out of business in 2001.

The Roton now sits in a small park at the port, a testament to the airfield’s philosophy.

The Rotary people did not go away, but instead founded new space companies. Jeff Greason, Rotary’s propulsion chief, opened XCOR Aerospace, also at Mojave. The company is building a space plane called Lynx that, like SpaceShipTwo, is meant to take tourists on suborbital flights. The Lynx is smaller, with just two seats: one for the pilot, the other for the passenger.

XCOR has almost run out of money a couple of times — employees have gone without paychecks occasionally — but says it is flush with cash right now because of an infusion of investments. Test flights of the Lynx could begin this year.

Like everyone at the Mojave port, Mr. Greason is looking forward to the SpaceX capsule launching, viewing it as just the latest step along the road. “They have much to be proud of,” he said of SpaceX, run by Elon Musk, an Internet entrepreneur. “But I don’t believe they have reached the point where they are independent of NASA for their continued research and development activity.”

For that matter, neither have most of the start-ups here. While they cheer on Mr. Musk’s rocket, they hope the momentum they are building is larger than that flight’s fate.

“It’s ridiculous to condition the success or failure of the industry on any one launch,” Mr. Greason said, but “there is reason for optimism that in the next few years, one or more companies — I certainly hope we’re one of them — will become profitable.”