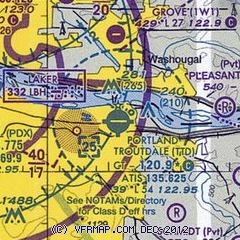 TROUTDALE, Ore. – You drive out to the hangar one afternoon, it’s a great day to be in the air and you can’t wait.  You make the turn onto the airport and what do you see?  Construction cranes?  In the pattern?  Hey, what gives?  Who the heck is building here? What are they thinking?

They’re thinking buildable land, folks.  I’m hangared at Troutdale, TTD, a mostly VFR airport (okay, we have a crummy NDB approach but the minimums are 1,050 msl).  Imagine my surprise when I discovered that somebody wanted to build a power generating plant about 1/2-mile north of the runway.  I’m a member of the TTD chapter of the Oregon Pilots Association and I’m president elect of that, so I figured I’d better show up at the informational meeting.

That meeting knocked my socks off.  The Troutdale Energy Center plans to put a natural gas-fired generating plant smack under the north downwind pattern.  The main stack would send up a high velocity thermal plume already cited as a danger to pilots in the 2012 Aeronautical Information Manual (AIM), and the cooling towers, located only 1/4-mile north of the approach end of runway 25, would emit warmer than ambient temperature, 100% saturated air constantly.  Gee, sounds like a fog generating machine to me.  And right on the runway.  What are they thinking?  Surely somebody is going to say no to this.  The FAA, right?   It’s only common sense.   Right?  Right?

Another Troutdale pilot with an extensive knowledge of this type of generating plant confirmed my worst fears and offered some photos of the steam emissions from similar plants located in Boardman and Clatskanie.  In our wet, western Oregon climate, we’re going to see a serious loss of visibility on gray or damp days and a significant reduction in flyable days out of TTD.  The thermal plume is a serious hazard that has caused at least one documented crash on the NTSB record as well as the grounding of several airliners that overflew a similar thermal plume and suffered severe turbulence.  Airliners?  What’s going to happen when I overfly it in my 152?

And nobody was questioning this site.  The company had not even mentioned the airport in their public Notice of Intent

The Oregon Pilots Association stepped up to this challenge.  We collected the  NTSB report on the crashes resulting from overflight of a thermal plume and documentation of airliners grounded for inspection due to turbulence after overflying plumes on approach. The AIM instructs pilots not to overfly thermal plumes and the FAA has taken successful legal action against pilots who have violated instructions in the AIM.  That means if I crash after overflying that plume it’s my fault, right?   Right.  I read the court case.

Troutdale is a very active training airport with more than 15,000 training flights projected for 2013 and two active flight schools on the field.  Now we’re going to send all those student pilots to the south downwind pattern because the north pattern is no longer usable?  We can’t widen the downwind since the steam emissions from the cooling towers will prevent the tower controllers from keeping the required visual contact with traffic.  So over to the south we go. Crowded patterns make for near misses, no matter how good the tower controllers are.  Students make mistakes. We’re going to send out newly soloed students in 10 mile visibility only to see the wind shift and suddenly, the approach to runways 25 or 7 is 6 miles? That’s legal, but a recipe for a stall spin as an overloaded, newly soloed student struggles with a landing in reduced visibility. This is a serious safety issue.

The OPA contacted Dave Ulane, our excellent AOPA Northwest Regional Representative, and he and Greg Pecoraro, Vice President of Airports and State Advocacy, visited TTD. Greg watched from the tower as I flew Dave in the pattern and both came away shaking their heads. Too close. Too close to the runway. AOPA is behind us on this, but it’s still up to us, the Oregon Pilots Association, to deal with this on the ground.

I hope we’ll win this. I hope we can confront enough people with safety and legal issues that the project is denied by the FAA or the Oregon Department of Energy.  But there’s a lesson here for all of us who enjoy our freedom to fly. It is up to us to defend that freedom.  If we had stood back and said nothing…that plant might be legally sited on that ground right now.  It is not, yet.   We need to be aware of what is going on in the neighborhood.  Maybe go to that city  council, county, or port meeting.  Listen to rumors.  Check in on public websites. Don’t wait for somebody else to step in and stop it.  What if nobody does?  Once the bulldozers roll in it’s way too late.

It is our freedom to fly, but right now, to keep that freedom, we need to watch our backs. And our downwinds.

(CalPilots Editor’s Note: We have been fighting this issue in California and warning others about the stealth power plant company business strategy for years now).