Airport Board to Consider Palmdale Lease 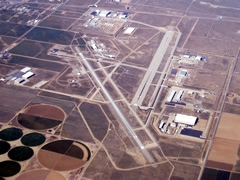 The Los Angeles Board of Airport Commissioners was scheduled to vote Monday on transferring the lease on the terminal building at LA/Palmdale Regional Airport to the City of Palmdale.

A staff report recommended the commissioners approve the transfer of the 9,000-square-foot terminal building located on 61 acres in the Antelope Valley city. The facility had been leased by Los Angeles World Airports from the U.S. Air Force.

The last carrier to operate at the Palmdale airport was United Airlines, which pulled out in December 2008 after offering flights to San Francisco for about 18 months. A $900,000 federal grant partially subsidized the airline’s service.