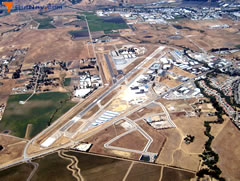 A skittish Board of Supervisors moved its county airport restructuring proposal forward slightly last week, but board members said they want
reassurances that the investment will bring a measurable return.

Supervisor Frank Mecham took much the same tack, alluding to a decrease in passengers at the airport.

Technically, the board on Tuesday merely allowed Howell to move forward with “conceptual work” on its hoped-for 46,000-square-foot terminal.

But the discussion item provided an opportunity for the county’s elected leaders to take the longer view. They found it cloudy.

The airport, which Hill described as “struggling,” has fallen on hard times in the past half decade. As the recession cut a swath through it, a large proposed new terminal was reduced in size, and a would-be parking garage shrunk to a paved outdoor parking lot.

Howell and others have sought to move forward nevertheless, albeit in a less ambitious way.

They are encouraged in part by a $15 million Federal Aviation Administration grant for design services of a new terminal building. But the projected cost is $22 million, according to numbers submitted by Howell, although he
stressed that the numbers, like the project itself, are uncertain. Of that $7 million gap, $3.6 million could be paid by passenger facility
fees, Howell said.

But supervisors wanted to know where the rest of the money would come from,
and worried that it might not be well spent in the long run.

Mecham questioned whether the downturn in passengers might affect the federal grant. “Does the FAA worry about declining emplanements?” he asked.

Howell said the FAA has found that the existing terminal violates its standards and is “anxious” for a new terminal to be built.

Supervisors and community economic leaders like Mike Manchak of the Economic Vitality Corporation said the airport is important to the county’s economy in general, and the tourist economy in particular.

Hill agreed that the airport is “an investment in the community’s well-being.” However, he asked, what if the expansion does not yield
increased air service, entice new businesses, or retain current ones?

Hill said he would like to know how other small airports in outlying areas that have expanded are helping their communities.

Howell agreed that the questions were good ones, and said he would come back later with more concrete information.