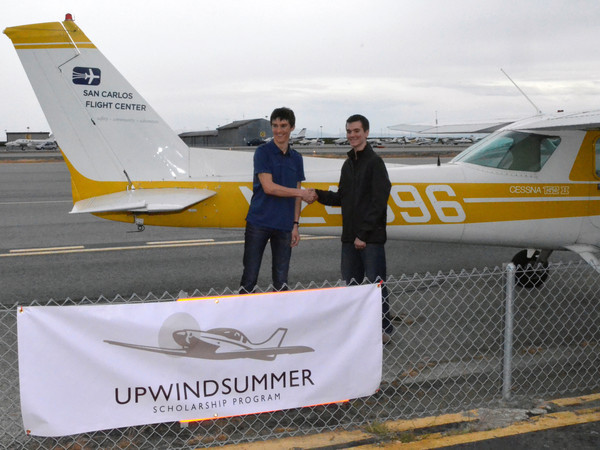 Upwind 2013 Winners Eric Dasmalchi (L) and Matt Moropoulos(R) Credit Courtesy of UpwindEric Dasmalchi of Half Moon Bay will begin a flight-training program in April as a recipient of the Upwind Summer Scholarship. wo local young aviators are recipients of scholarships that will help them obtain their private pilot licenses.

Eric Dasmalchi of Half Moon Bay and Matt Moropoulos of Belmont were recently selected as winners of the 2013 Upwind Summer Scholarship program.

These aspiring young aviators have been awarded a complete primary flight -training program that begins with ground school in April and continues with flight training once the academic school year is completed, according to a statement released by Upwind.

Dasmalchi is a junior at Half Moon Bay High School and the son of Glenn and Wendy Dasmalchi. He is an avid cyclist and is actively involved in the League of Creative Minds, with whom he traveled to China to compete in a Model United Nations conference. Dasmalchi was inspired to learn to fly when, at age 12, he was treated to a ride in a Cessna 172.

“When the pilot offered the controls to me, I remember saying ‘I have the airplane’ as if it was some magic spell that granted me entry into a whole new world,” he said.

Moropoulos, the son of Chris Moropoulos and Leigh Herman, is a junior at Carlmont High School. He is a member and volunteer at Hiller Aviation Museum, a freelance web designer, and competes as a member of his school’s robotics team.

Moropoulos’ first flight experience in a 2-seat Kitfox launched his passion for aviation.

“Seeing and feeling flight from the perspective of a small plane drastically changed how I thought of flying. I immediately felt a unique and personal connection to the aircraft. I saw the world from a new angle and perspective that day and I’ll never forget it,” he said.

In partnership with San Carlos Flight Center (SCFC), the Upwind Summer Scholarship Program (Upwind) was created to promote piloting and general aviation, and to cultivate interest in aviation as a career.

“We are very excited to award our first scholarships this year to Eric and Matt. The Upwind Summer Scholarship Program provides a unique opportunity for high school students to receive their pilot’s license, giving them a foundation upon which to build their careers in aviation,” said Upwind Program Director Michael Vowles.