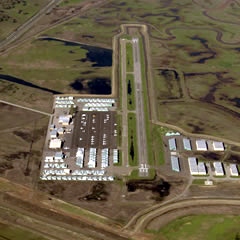 Aviation users of Gnoss Field got some good news and bad news earlier in February for the long-delayed runway extension.

On February 11, the good news came from the Marin County Board of Supervisors who voted 5-0 to certify the Environmental Impact Report (EIR) for an 1,100 foot extension of runway 13/31. The certification vote allows the project to move forward through its many steps toward lengthening the runway to 4,400 feet.

The bad news arises from the emotional, organized and determined opposition by neighbors and the supportive comments they received from the Supervisors. The next steps will be tougher.

The idea of lengthening the runway appears in the 1989 Airport Master Plan. Back then, the expected closure of Hamilton Field and Smith Ranch private airport fueled a plan for growth at Gnoss Field. By 1997, that growth had not happened and the development plan was shelved. In 2007, the Countywide General Plan included the runway extension at the airport and hence began the evironmental review process. Stakeholders met in a scoping meeting in 2008 to establish the issues that the state-mandated EIR analysis would need to address. By 2011, the draft EIR was released and comments received. In late 2013, the final EIR was released and more comments received. The last response to comments was published in January 2014 and the public hearing held in February – 25 years after the master plan.

The next steps will also take a long time. Soon, the FAA will determine the Enivironmental Impact Statement (EIS) for the federal environmental review. With a Decision of Record on both the EIR and EIS, planning the actual project can begin. First up will be an update to the Airport Layout Plan (ALP) containing both a narrative justifying the project and how the airport will be reconfigured. Then an engineering design of the runway extension happens followed by construction. Since the scale of the project likely exceeds the annual funding for airport improvement projects, construction will need to be phased over 2-3 years.

Any development project in California needs to satisfy the CEQA process, the California Environmental Qualify Act, through an EIR analysis. The consultants hired to prepare this EIR, Landrum and Brown, did excellent work, in my opinion. The PDF version exceeds 200 mb and the paper version lives in two large binders about 6 inches high, all of which were published on the web for review.

With such an exhaustive analysis, what could go wrong, eh?

Four major areas of concern appeared in the comments, both written and expressed during the public hearing. Wetlands. Noise. Overflight. Fleet mix. Amazingly, the mitigation measures provided in the EIR seemed to satisfy most of the concerns about wetlands, birds, endangered species and similar issues.

However, the neighbors spoke powerfully about their fears of noise, overflights and more jets. I found it instructive to better understand their issues

Noise issues seem to demonstrate classic miscommunication. Neighbors express concern for aircraft making noise and disturbing their Sunday afternoons outdoors. Consultants and planners rely upon CNEL measures of Community Noise Equivalent Levels. The neighbors complain about single event noises and planners respond with continuous noise levels. It’s like the difference between a motorcycle that rumbles as it passes and the highway noise that roars all day.

CNEL numbers come from a well-regarded noise model that produces contours from inputs of fleet mix, operation counts, and flight tracks. Contours of 60 db or greater require some planning efforts. At Gnoss Field, the noise contours are very close in and far away from the neighbors. Yet, the Supervisors consider the neighbors to have raised valid concerns.

We will need better explanations to deal with the miscommunication.

“Build it and the will come!”

Extending a runway triggers fears that commercial operations will ruin the peaceful rural setting that these neighbors enjoy. Another classic miscommunication with consultants and planners.

Of course extending the runway will attract more usage of the airport. Financially, the viability of any airport depends on active participation for revenues to maintain the facilities – hangar rents and tie-downs, fuel sales, aviation training and maintenance businesses, etc.

But the limitations of runway and taxiway designs constrain the wingspan and max gross weight of aircraft using the airport. In the EIR, the neighbors latched onto the FAA runway length design circular that lists aircraft that could use longer runways. And that list is daunting to non-aviation folks. That lists includes almost all Cessna jets, Beech jets, Falcon jets, Lear jets, Hawker jets, and even Saberliners. Yet, most have wingspans that exceed the runway/taxiway separattion design standard and max takeoff weights greater than the pavement strength of 26,000 pounds at Gnoss Field.

So, maybe they all won’t come. We need to better explain the reality for operators of small jets and turboprops.

This overflight topic rounds out the fear and distrubance concerns raised by neighbors And we pilots make it worse. Planes flying over houses because of poor planning by pilots give them anecdotes that last forever.

Gnoss Field noise abatement procedures recommend against straight-in approaches to runway 31 or straight-out departures from runway 13 – because you fly directly over those residences at low altitude.

For certain, some pilots fly straight-in or straight-out anyway. Runway 31 has no instrument procedure, so that’s not a justification. Every minute on the AWOS radio broadcast, the reminder repeats to follow the Gnoss Field noise abatement procedures. As one neighbor put it succinctly, the pilot attempted to save a minute or two by not flying the traffic pattern. Sheesh!

However, the frequency of overflights remains very small. If we could obtain flight path data, then we could show how infrequent. Consequently, we are talking with the FAA through a FOIA request to see what we can get.

Oh, and did I mention that those neighbors live in housing developments that required notice of overflights? The first home owners bought their houses at least 20 years after the runway was paved.

The power of emotion and single events remains a huge challenge to overcome our determined opposition.

What’s a Pilot to Do?

Pilots at airports need to be vigilant and connected. Vigilant to plan your flight to avoid triggering complaints at all airports you visit. Connected to ensure that the aviation community knows and responds to support aviation in your area.

Keep on top of the money. FAA grants require airport operators to use airport revenue soley to support the airport. Airport Improvement Grants provide 20:1 leverage for 5.5% of local funds through the federal and state aviation grants.

Support your airport. Anything happening on the airport should benefit the airport operating fund. Fuel sales, training, maintenance, hangars, tie-downs, sales and rentals. Those are the income streams that fund the local match for grants and ensure things get fixed when broken.

About the author: Rick Beach relocated to Gnoss Field from the San Diego area where he spent 6 years working on land use issues around airports. The too-tall Sunroad building got lowered through his efforts and he was recognized by AOPA with the 2007 Sharples award and Calpilots with the 2008 Advocate Award. He flies a Cirrus SR22 around the country leading the safety efforts of the Cirrus Owners and Pilots Association.