The city of San Luis Obispo and the commission that drafts the safety plans for the San Luis Obispo County Regional Airport are going to head-to-head over future development in the city.

The City Council this week took the first step to overrule the Airport Land Use Commission’s decision that the city’s update of its general plan, or its blueprint for growth, is inconsistent with the airport’s safety plan.

That plan, in place for more than 40 years, determines what type of development can occur around the airport, taking into account both safety and noise impacts and to protect the airport from development that would hinder its future operations. 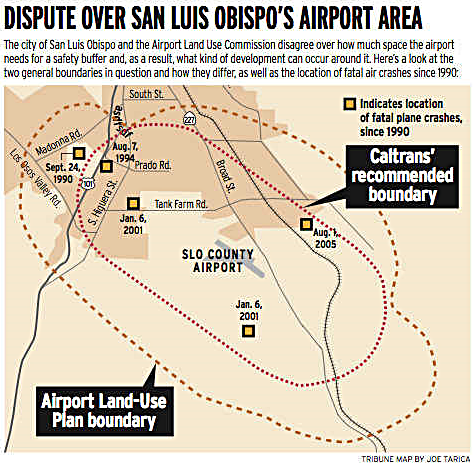 (Pictured) The Airport Land Use Commission safety boundary compared to the Caltrans boundary used by the city.

Until now, if a development was inconsistent with the safety plan, the city and the commission would meet and negotiate. If the city’s plan to overrule the Airport Land Use Commission prevails, it will no longer have to abide by the safety plan.

Both the city and the commission contend that they are following the required state guidelines, set forth by the Caltrans Division of Aeronautics, that dictate the boundaries of airport safety zones.

Yet, both plans are drastically different in size and scope.

The city claims that the commission’s plan is built on non-verifiable data that unduly restricts development in the southern half of the city. However, county senior planner Bill Robeson, who is a liaison to the commission, said the existing safety plan abides by state standards.

There are several potential sites for development that fall within the boundaries of the Airport Land Use Plan: the 150-acre Avila Ranch on the north side of Buckley Road, the 131-acre San Luis Ranch and the 300-acre Chevron property along Tank Farm Road. Those areas are either within city limits or in the city’s sphere of influence.

Under the current airport safety plan, residential development would be limited — which is a stark contrast to what the city envisions.

“If we want to talk about density and building housing, it has to happen in the south,” said Councilwoman Carlyn Christianson. “No one is saying they want to build anything encroaching on the safety zone — or closer than state guidelines allow.”

The commission is in the process of updating its airport land use plan — a draft of that new plan should be available in the next six months, said Robeson. Derek Johnson, the city’s community development director, said that so far he has not been able to get a copy of it.

Johnson contends that instead of abiding by the state aeronautics act, the commission makes arbitrary decisions about land use.

“There is a standard methodology for predicting risks and forecasting noise,” said Johnson. “Instead, development decisions are based on horse trading with arbitrary decisions being made by a group of appointed people only interested in the airport.”

Johnson said he anticipates the safety zones will get bigger with the new plan. But Roger Oxborrow, a 30-year veteran of the commission, said it will not. He said the update will reduce the plan’s threshold by 2,500 acres.

“What is going on is the city is aggressively attacking the plan, the commission and its members in an attempt to do everything it can to discredit and denigrate it,” said Oxborrow.

Some council members have equally as little faith in the commission.

“I would describe the past actions of the commission as a combination of arrogance and ignorance and it is very troubling,” Christianson said “Their actions directly affect the ability of the city to make decisions about is land use.”

To overrule the commission the city must submit its reasons to both the Airport Land Use Commission and the state division of Aeronautics — at which point both agencies have 30 days to respond. The City Council will then make a final decision, which will require a four-fifths vote.

If the council succeeds, the city will have sole discretion over future development. The override will also shift the liability away from the airport.

“The state statue says that liability shifts from the airport but not who it shifts to,” said Johnson. “A person would have to show a causal relationship between an accident and the city’s decision.”

Johnson said because the city will use safety zones based on the state standards, it will not increase its risks of future claims.

What is the Airport Land Use Commission?