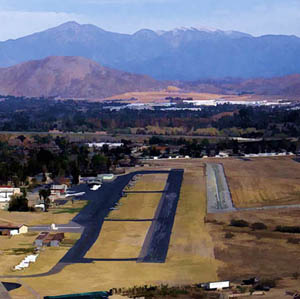 Rialto’s loss is Flabob’s gain! Rialto unfortunately lost an airport, but as a result, Flabob gained a bunch of hangars and other airport related items. Flabob’s “briar patch” hangars have been torn down, grading has begun, and asphalt will soon be laid west of the gas pump in preparation for the erection of a whole slew of new hangars–some 65 to eventually be available to house planes at Flabob…doubling the hangar space now offered.

The hangars and other equipment were donated by the city of Rialto. L67 was closed this past Sept. 18. On Oct. 8, Flabob officials were notified that they were the recipient of most of the hangars and equipment offered through Rialto’s “Disposition of

Surplus Property” contract. Problem was, Rialto wanted the property moved in a hurry. Since the price was right, Flabob immediately hired contractors to disassemble and move the hangars and equipment.

Hangar space at Flabob has long been at a premium, with many names on a waiting list. The sudden doubling of space available will certainly have a positive impact on the airport. Airport Manager Beth LeRock said there will be a priority structure for renting out the new hangars. “The first priority will be to those who were in the T-hangars that were torn down to make way for the new hangars,” she said. “The second priority will be for pilots who wish to relocate from Rialto Airport.” The third priority will be for those already on Flabob’s waiting list for hangar rental. LeRock said the new tenants will provide new life-blood for Flabob Airport because of increased revenue and more pilots who will participate in airport activities.

These will rent for $800 and $925 per month, respectively. In addition to the 65 hangars, Flabob will be receiving two PAPI systems, three lighted windsocks, a rotating beacon and tower, spare runway lights,

runway signs and taxiway signs. “This came on us all of a sudden,” LeRock said, “and we’ve had to move fast. We hope to have all the hangars in place by January…if all goes well!” LeRock said she has been busy dealing with the permits and government red tape required to get the job done. “The City of Jurupa Valley has been

wonderfully supportive and cooperative,” she said. This bittersweet windfall may be a huge boon for the future of Flabob

Airport. The influx of scores of new aircraft and pilots will make this historic airport a busier and more successful hub of aviation activity in the Southern California area. It will be a better looking, more active airport. Hopefully, there will be increased social activity among aviators, more new members to join EAA Chapter One.

We at Chapter One give our utmost support to the staff and contractors of Flabob Airport through this challenging and exciting transition!