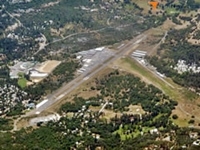 This year, the Columbia Airport will be celebrating its 49th Annual Father’s Day Fly-In from June 19-21st, 2015. The event, sponsored by the airport, will celebrate the holiday weekend with live music, airplane rides, and family-friendly activities.

The weekend-long event is dedicated to Cal Fire pilot, Geoffrey “Craig” Hunt, who died last year flying for the Dog Rock Fire in Yosemite. A small dedication will precede the National Anthem at 11:30 a.m. at the opening ceremony on Saturday.

What began with a handful of people in 1966 now attracts thousands from all over the region, say Tuolumne County’s Airports Manager, Benny Stuth. “It began as a relatively simple fly-in where a bunch of pilots would meet up and camp out at the airport for the Father’s Day weekend. It grew from there,” says Stuth. This year, attendance is expected to reach more than 1,200 people as the weekend will expand to include entertainment, food, contests, and airplane rides among many other activities.

The Fly-In kicks off on Friday where there will free admission, an evening BBQ hosted by the Columbia Fire Department, and an outdoor movie at the airport’s campground. A traditional Father’s Day Dinner will follow on Saturday night. Among the plethora of food vendors, the Fly-In will introduce its first annual chili cook-off with tasting for ticket holders from 12 – 3 p.m. Back this year is the ever popular pancake breakfast, hosted by the by the Boy Scouts on both Saturday and Sunday morning.

The festivities are just as impressive as the food. “We have six cars ranging from a Ferrari to supped-up Camaros and Corvettes who will be racing a TBM aircraft,” adds Stuth. In addition to an airplane and car race down the runway, guests can also expect to see two T-28’s, A Beech 18, 4 WWII Yaks, and a B-25, among other Warbirds and antique aircraft…even a chance to take a ride on one!

“Most of the airplane rides entail takeoff, a quick flight around the pattern and a low pass down the runway, after which they will be taken around the mountain area that can range from points in Calaveras and as far south as Groveland/Yosemite area. The B-25 ride will be a great option for flights as people flying in the B-25 will be able to move around the aircraft during flight, including being able to look out the rear entrance as the plane flies around.”

Also new to this year’s Father’s Day weekend celebration, an expanded Kids Tent titled the “Kid’s Hangar” which offers jump houses, arts and crafts, and opportunities to hear from pilots.

“As an aviation enthusiast I think this is an amazing day to celebrate Father’s Day. It sure beats a simple brunch! As a father myself, I never skip an opportunity to bring my son to the airport which he loves. To be able to bring my family to the airport and [share my passion] with the most important people in my life is a no brainer. There will be a lot to look at, lots of food to eat, live music, a chili cook-off, and a kids area,” adds Stuth, “I mean, how much better than this can it get?”

For more information, including ticket and ride fees, visit FathersDayFlyIn.org.