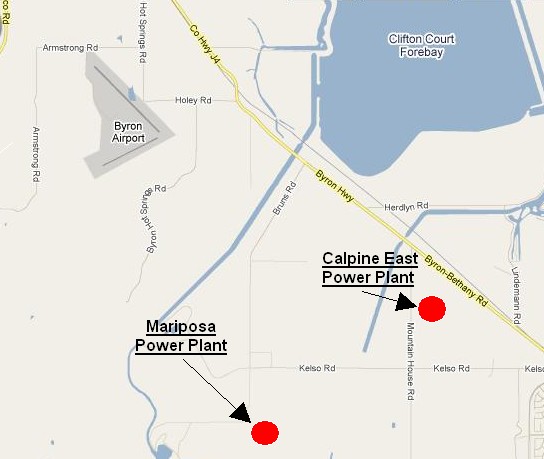 Byron Airport in relation to both proposed power plants

August 2010
Power trade has its critics
Some feel S.J. getting bad end of energy plant deal

TRACY – A natural gas power plant proposed for just outside San Joaquin County would be justified in part by reductions in pollution from a facility in Santa Clara, far from the smoggy Valley.The 200-megawatt “peaker” plant, meant to help satisfy California’s peak energy demands, could emit up to 46 tons per year of smog-forming chemicals, according to a report released this week.To offset that pollution, developers of the Mariposa Energy Project would obtain credits from a facility which has decreased its own emissions – a kind of trade.
Editor’s Note: Here is a good opportunity to read about the power plant industry’s back room deals to pollute the air for their profit.

The report about Mariposa’s impact on air quality can be downloaded at www.baaqmd.gov. Search for “Mariposa.”

But here’s where it gets dicey, one vocal power plant opponent says.

Because the Mariposa plant would be built within Alameda County – albeit just barely – it would be under jurisdiction of the Bay Area Air Quality Management District instead of San Joaquin Valley air cops.

And pollution reductions to offset the plant’s impact will come not from a Valley source, but from Owens Corning Insulating Systems in Santa Clara.

Will a decrease in pollution from a factory in Santa Clara make up for emissions from a new power plant seven miles northwest of Tracy?

“You know which way the wind blows,” said Tracy shoe store owner and power plant opponent Bob Sarvey. “They (Alameda County) get the property tax dollars, and we’re stuck with whatever comes out of the smokestack.”

The Mariposa power plant is the latest in a series of power projects proposed along the Alameda-San Joaquin border. Sarvey’s protests killed one of those sites last year, the much-larger Tesla Power Project.

The community is mixed on this latest proposal. The Tracy Chamber of Commerce says in a letter that the power plant could stimulate job creation and local spending to the tune of $33 million during construction, and $5 million each year afterward.

Others, including the Mountain House Community Services District – just 2.5 miles east of the plant location – oppose it, citing the emissions credits issue and concern about the Valley’s air, which already exceeds federal pollution standards.

Sharing that worry is the San Joaquin Valley Air Pollution Control District, which notes the plant is a mere 2.4 miles from its jurisdiction.

The Valley district, however, has agreed to a $644,503 payment from the plant’s developer, Mariposa Energy LLC, to help make up for the impact on local air quality. The district said in a staff report that the developer “exhibited great willingness” to address Valley concerns.

This week, the Bay Area air district released a report detailing the plant and its air pollution impacts. Lisa Fasano, a spokeswoman for that district, said the plant design has already been changed based in part on the district’s own concerns.

“This is a very clean facility,” Fasano said Friday. “They’re putting state-of-the-art air pollution controls on it, and it has conditions … that will make it the cleanest burning power plant of its kind.”

Future hearings before the California Energy Commission would be necessary before any new power plant could be built.