Sub-Divsion and Water Park Development northwest Tracy Airport is Denied – A judge invalidated a developer agreement Wednesday, Feb. 16, between The Surland Cos. and the city of Tracy that had paved the way for the planned Ellis subdivision and a water park southwest of tow Judge Lesley Holland, in a two-page minute order issued this week, sided with Tracy Region Alliance for a Quality Community, which in 2009 filed a suit alleging that the agreement was illegal and that there were serious deficiencies in the project’s environmental review. 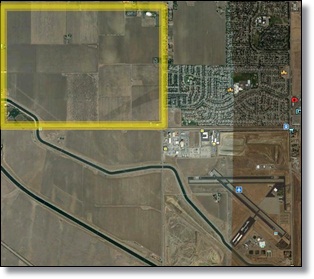 Tracy attorney Mark Connolly, who filed the lawsuit on behalf of TRAQC, said the developer agreement was flawed from the beginning. He added it’s the second time a judge has ruled in TRAQC’s favor defending city growth laws from City Council decisions. TRAQC successfully won a lawsuit in 2006 challenging Ordinance 1095, in which the council tried to award more growth allotments via developer agreements than allowed by slow-growth law Measure A.

“We told (the city) from the very beginning five years ago not to proceed with this…,” Connolly said. “This is the second time they’ve broken the law related to growth, and they’ve been called on it by separate judges. … So, the question is, have they learned to obey the law yet?”

Connolly said that, in this case, Holland gave his group everything it wanted.

“No part of this project is approved right now,” he said.

City of Tracy attorney Dan Sodergren said city leaders haven’t yet decided on their next step in the litigation process.

“We’re disappointed with the decision that came down,” Sodergren said. “The judge didn’t offer an explanation, so we don’t really know what the decision was based on at this point.”

If the city requests an explanation, TRAQC will be asked to submit one, and that will be considered by the court for approval. The City Council will discuss the matter during a closed-session meeting March 1, Sodergren said.

As recently as three weeks ago, Surland Cos. CEO Les Serpa expected to begin work on the 2,250-home Ellis subdivision on schedule in 2012. But following Holland’s ruling, it’s uncertain what Surland would have to do to breathe life back into the project.

Serpa said that Holland’s order was vague, and his company needs more direction before it can fix whatever shortcomings the judge found during the review of the case.

“He’s going to have to, at some point, tell us what he’s concerned about and what we have to work on,” Serpa said. “We certainly don’t agree with it.”

Serpa said there are “no timelines” for getting the swim center or the Ellis project jump-started again, but that could change after his company and legal counsel review the judge’s decision.

The ruling also throws a wrench into the city’s plan to build a water park, the centerpiece of the developer agreement.

Under that accord, Surland would give Tracy $10 million and 16 acres with which to construct a swim center in exchange for the right to 175 residential growth allotments per year until the Ellis project was built out.

A final design for the water park — with its first phase including a main building, an activity pool, four water slides, a wet play structure, a lazy river ride, an interactive “sprayground” and a concession area — was approved by the City Council on Jan. 4 to applause from the audience in the council chambers.

But Holland’s decision means the city’s deal is invalid, leaving those plans in the lurch.

“It would have been a great thing to happen in these difficult times, a positive thing for our community. … This litigation has certainly put a stop on that.

“It’s really sad to us that the community’s will is going to be thwarted on this.”

Connolly, however, said the real shame is how the city wasted taxpayer money and staff time on an agreement that was clearly flawed.

“It’s really a tragedy for the people of Tracy,” Connolly said, “because this project was a no-go from the very beginning. And we told them that, and they ignored that.”