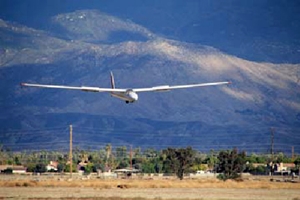 A bit of aviation history was made in Southern California at the Hemet-Ryan Airport on November 12, 2011. For the first time in over two years, the aircraft taking off and landing included gliders and tow planes. The Cypress Soaring club, with tug support by Tom King Aerial, was again able to conduct instruction and re-familiarization flights at an airport that had once been the scene of a successful and vibrant soaring community.

The airport, owned by the county of Riverside and operated by the county’s Economic Development Agency, had been the home gliderport for two soaring clubs and a commercial glider operation since the early 1960s. In 2009, the county banned glider operations due to ‘safety concerns’ while concurrently accepting the commercial operator’s request for an early end to his lease. By October 1 of 2009, every glider and trailer belonging to the clubs and individuals, all their ground equipment and hangars, and all the property belonging to the commercial operator were gone – but the fight was on.

It was a complex fight. The county obtained the airport from the government after World War II via a surplus property deed, and is bound by certain Grant Assurances in its operation. As a recipient of fi nancial grants from the federal government, the airport must also abide by additional ‘strings’ that come attached to that money. Additionally, the FAA is the agency with the overall authority to determine airport safety.

The California Pilots Association’s attorney, Ron Cozad, a CalPilots regional vice president, provided the guiding force in the legal battles. CalPilots has been successful at defending airports and flight privileges in California since 1949, and has developed the expertise needed to navigate the bureaucratic landscape at the local,state, and federal levels. In February 2011, the FAA ordered the county to, among other things, provide glider operators access to the airport. It had been a long, hard fight. Visit the Calpilots’ website for more complete details: www.calpilots.org.

Simply saying that CalPilots was instrumental in this victory for gliders drastically understates their role, the importance of such state-level pilot associations, and the critical need for glider pilots to support those associations. National groups such as the SSA and the AOPA have their place in these battles, but most fights will begin at the local level, and the state-level aviation associations will be the cavalry on the field.

Join and support your state aviation association right away. These are the ground troops constantly on the front lines advocating on behalf of all general aviation, including soaring. Supporting them may help your flying site to avoid type of crisis that befell the soaring community at Hemet, and having some skin in their game will be valuable if need them to go to bat. The gliderport they save may someday be your own.