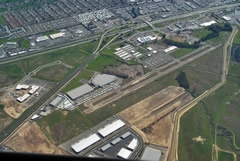 Planning for the future of the Nut Tree Airport is back on track with the first Master Plan update meeting since December.

Solano County has owned the airport since 1969 and is currently in the process to update its Master Plan, the first of its kind since 1993.

On Wednesday night, alternatives were weighed by the group of 24 that consisted of county, city and airport employees.

One alternative seemed to stand up to the test: It fixes short term needs while also planning for the distant future.

Dubbed Alternative 3, the plan shifts the runway north 180 feet away from an existing canal, identifies aviation and non-aviation development areas, maintains the 4,700-foot runway and plans for the year 2030 with a long-term plan to protect adjacent areas for future growth.

“In my professional judgment, it’s probably the prudent thing to do to protect that area,” said Nut Tree Airport Manager Dave Daly. “It plans and reserves that area for possible runway extension.”

Although the existing runway will likely meet the needs of the airport for the next 17 to 18 years, Daly explained that it would be a good idea to plan ahead now.

“You should protect what your future might bring,” he said and added that even though the space has been preserved, when the time comes there will still need to be a demand to justify a bigger runway.

How the airport will tie into the adjacent Nut Tree Development is also important to the city and the county.

Concerns were raised during the meeting about land use compatibility zones, how existing development, such as the Nut Tree Plaza, and future development will be impacted by changes at the airport.

When complete, the updated Master Plan will establish guidelines for improving the airport’s facilities during the next 20 years, lay the groundwork for further environmental analysis, and enable the airport to obtain Federal Aviation Administration funding for capital improvements.

Current working papers and background information, as well as the Master Plan alternatives that remain under consideration, can be found at www.solanocounty.com/AirportMasterPlan.