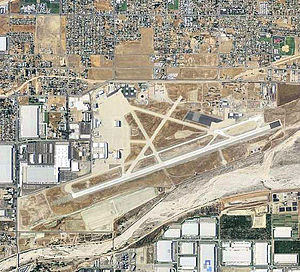 A judge has rejected the Inland Valley Development Agency’s contention that its work redeveloping the former Norton Air Force Base in San Bernardino into a logistics hub and commercial airport made it exempt from a law that dissolved redevelopment agencies statewide.

Judge Lloyd G. Connelly dismissed the IVDA’s lawsuit, siding with the state of California and related agencies that were named as defendants, according to a court order filed Sept. 5.
The IVDA, as well as the Victor Valley Economic Development Authority that has been redeveloping the former George Air Force Base, filed suits earlier this year seeking exemptions from ABx1-26, the Assembly bill that did away with redevelopment agencies. The judge threw out both agencies’ claims.

Both likely will appeal the decision, according to leaders with the agencies.

A.J. Wilson, interim director of the IVDA and the related San Bernardino International Airport Authority, said he would recommend an appeal to the IVDA board Wednesday, Sept. 12.
“We’re not talking about a fatal blow here,” he said of the court’s decision.
In the short term, the IVDA has funds available to cover its debt and pay for approved projects. But a few years from now, the agency may be caught without a way to pay for improvements to the former base if the decision stands, Wilson said.

The IVDA and Victor Valley have pointed to earlier state legislation that carved out special designations for both agencies, giving them the powers of redevelopment agencies in order to overhaul closed military bases.
Mike Rothschild, a Victorville councilman for 24 years, described the two agencies as being “joined at the hip” because of the legislation.
“The state is grabbing every dollar it can everywhere,” he said. He hadn’t heard about the judge’s ruling but said he expects his agency to appeal.
State lawmakers introduced several bills meant to preserve redevelopment at former military bases, but none cleared the Legislature during the legislative session that just ended.
One of the measures, Assembly Bill 1644, would have enacted the California Military Base Reuse and Preservation Act of 2012 and granted redevelopment powers to communities affected by base closures. The measure’s author, Assemblywoman Wilmer Amina Carter, D-Rialto, represents some of the area covered by the IVDA.

For the time being, the IVDA and Victor Valley agencies have been operating as if they were just like any other disbanded redevelopment agency. The IVDA has appointed an oversight board and regularly sends lists of payment obligations to the state for review and approval.

So far, the state has turned down $410 million the IVDA had hoped to eventually use for improvements to the San Bernardino airport and incentives for the first airline that agreed to offer regular flights there. Wilson said the agency plans to sit down with state officials at some point to go through each project and appeal for funding.
“To date, we’ve had no practical impact,” Wilson said. “In the long run, down the line somewhere, that becomes different.”