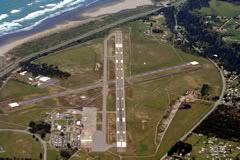 Fortuna Arcata AirportAt its first meeting of the New Year on Monday, the Fortuna City Council will hear a proposal to rename the Arcata/Eureka Airport.

According to the council agenda, the Redwood Region Economic Development Commission, the entity proposing the change, says a rebranding will attract more tourism dollars, ultimately creating an environment for sustainable airline competition and lower ticket prices.

The commission has already presented the idea to the McKinleyville Community Services District and plans to present it to the Humboldt County Board of Supervisors at a later date.

The Federal Aviation Administration doesn’t regulate the name of an airport, just the airport code — ACV in Arcata/Eureka Airport’s case, according to the agenda report. As the commission

is not proposing a change to the airport code, re-naming the airport would be up to its owner and operator, Humboldt County.

Although the council will not take direct action on the matter Monday, council members will be asked to draft a letter to the Board of Supervisors indicating their support for the name change.