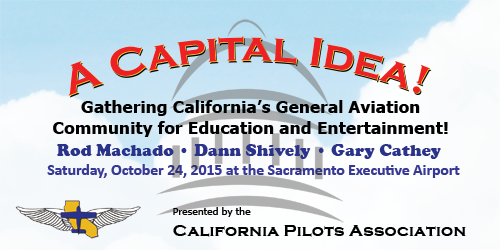 Join your fellow Pilots in Sacremento this October 24th for a Capital Idea.  You can register here.  Most of us don’t need an excuse to fly somewhere, in case you do here are a few: Discounted fuel, Catered lunch, “Wings” seminar, Exhibits, presentations, and the best part… hanging out with fellow pilots.

You will be joined by Gary and Rod, two of our speakers. Read their backgrounds below.

Gary Cathey was appointed Acting Chief of the California Department of Transportation (Caltrans), Division of Aeronautics in March, 2008 and received a permanent appointment in February, 2009. He is responsible for developing and implementing aeronautical statutes, regulations, and policies to sustain and promote aviation in the State of California. He ensures effectiveness and efficiency for all management aspects of personnel, equipment, and fiscal matters related to the Division of Aeronautics. He manages a staff of 25 and a budget averaging $7.5 million per fiscal year. Last year, Gary retired as a Lieutenant Colonel in the Air Force Reserve where he was assigned to the 922 Civil Engineer Flight at March Air Reserve Base in Riverside, CA. He is a graduate of numerous Air Force professional military education and leadership development schools, including the Air Command and Staff College (2006). Gary possesses an FAA Commercial Pilot Certificate with instrument rating for single and multi-engine aircraft. He is a member of: the Aircraft Owners & Pilots Association, the Reserve Officers Association , the American Association of State Highway and Transportation Officials – Subcommittee on Aviation, and is Chair of the National Association of State Aviation Officials.

Rod Machado A pilot since 1970 and an active flight instructor since 1973, Rod is also a National Aviation Safety Counselor. You might recognize Rod as the instructor on Microsoft Flight Simulator or as the author of seven aviation books. He has over 10,000 hours of flight experience earned the hard way—one CFI hour at a time. Since 1978, Rod has taught hundreds and hundreds of flight instructor revalidation clinics and safety seminars across the United States and Europe. He was named the 1991 Western Region Flight Instructor of the Year Rod is a professional speaker who travels across the United States and Europe delighting his listeners with upbeat and lively presentations. Machado truly loves mixing it up with the audience. His unusual talent for simplifying the difficult and adding humor to make the lessons stick has made him a popular lecturer both in nd out of aviation. Rod speaks on both aviation and non-aviation topics, including risk assessment, IFR charts, aviation weather, inflight emergencies, and safety awareness. He is also known for his rapid fire, humorous banquet presentations.

A great time is sure to be had by all attendies so sign-up today!

Posted in Events
Scroll To Top