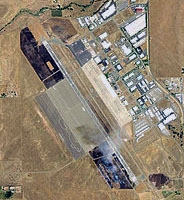 Chico >> After almost three hours of discussion, the Chico Airport Commission Tuesday night said it would not recommend the City Council agree to a long-term management proposal presented by consultant AvPORTS.

Commissioners said they had “concerns” with the proposal’s costs, as well as what the agreement would mean to the community in service and to the city in costs.

CalPilots Editor’s Note – CalPilot’s Paul Osterman states – “representatives of the CalPilots Chapter North Valley Aviation Association were one of many providing input to the commission”.

The Airport Commission went nearly page by page of the 90-page proposal, asking a team from AvPORTS about the fine details, which included a $15,000 monthly fee, among other costs.

Public comments pointed out that cost over the terms of the contract, with percentage increases and other charges could amount to about $8 million.

The 13 speakers who addressed the commission all encouraged the proposal be denied, citing the cost, no guarantees and the financial turmoil the city is shedding.

A strong and repeating message throughout the night was that the resources to rally the airport were already in the community and just needed to be tapped.

But Commissioner BT Chapman used that idea to form his support for the proposal.

“The resources are here, but where’s the community to show me the goods? If we let AvPORTS go, show me the plan to replace it?” Chapman asked the three fellow commissioners who voted to turn it down.

“I have concerns. I can’t support it,” said Chair Thomas Nolan-Gosling. Commissioner Michael Antolock said he was “scared” by the amount of money underlying the proposal.

“It’s too big an expense,” Antolock said, making reference to local talent that could be tapped.

Commissioner Thomas Kozik said there was too much a disparity between the picture painted by the proposal’s goals and his understanding of the aviation industry.

AvPORTS Executive Vice President Steve Forrer was the lead in going over the proposal, saying he believes Chico can land commercial air service after losing SkyWest’s United Service in December. It would be a few years down the road however, he said.

Commissioners pinned down the fact that AvPORTS has not landed commercial air service at an airport that has none, although representatives said they had attracted air service to communities already with service.

Regarding passenger air service, Forrer summarized improvements the airport needed, such as a larger terminal to handle the bigger planes that airlines are flying, indoor baggage area, as well as money to attract an airlines, either government grant and/or private dollars.

Most important were travelers to use the airlines.

Acknowledging the control the Airport Commission had over any management decisions, Forrer explained that more revenue was needed at the airport to get it back into the black, which could come from increased rents, paid terminal parking, charging landing fees that weren’t collected from corporate aircraft, filling building vacancies and developing open properties.

He said they were only suggestions made because the airport has struggled with operating costs exceeding revenue.

Forrer explained an on-the-ground airport manager was needed, with a staff of two or three as needed.

Rod Dinger, who has been involved in the Redding airport, was specifically mentioned in the proposal. Forrer said AvPORTS hoped to offer Dinger a job.

Many of the speakers were pilots, hangar landlords or tenants, saying the proposal didn’t provide enough support to the airport’s general aviation business, and a few stressed that there may be not hope for regaining commercial air service in Chico.

Other speakers encourage the commission to use the two studies that AvPORTS did under its current contract, a passenger leakage review and analysis, as well as a marketing plan.

Former Chico City Councilman Larry Wahl called the plan “flawed,” saying there where too many areas that didn’t add up. Local Knife River construction manager and pilot Rene Vercrussen called it “an expensive deal for Chico,” pointing out the $8 million math for a proposal that could go as long as 40 years.

Marshall Friedman, who resigned from the Airport Commission after one meeting, took a turn at the lectern, saying there were firms that specialized specifically in attracting commercial service and the city should spend its money with them. Vacancies in buildings and on parcels could be filled by the local community real estate professionals, he said.

He told a reporter earlier that he had resigned from the commission for “personal reasons.”

What led to AvPORTS submitting a management proposal was a prolonged and bumpy call for proposals that was revised several times. Several firms and individuals responded to earlier calls, but the last call for proposal only gained a response from AvPORTS, which the city paid about $200,000.

In landing the contract earlier this year, AvPORTS made it clear it would like a long-term contract for the airport management and submitted this proposal to the city.

A call after the meeting to AvPORTS for comments was not returned before deadline.

The proposal is expected to go to the City Council on Nov. 17.